NEW YORK (1010 WINS) -- President Donald Trump said Sunday he was giving the go-ahead to deploy the National Guard to New York, and he said the federal government is sending 1,000 beds and other medical supplies to the state as it battles a coronavirus outbreak.

Trump said he approved a Major Disaster Declaration for New York and that four Federal Emergency Management Agency medical stations with the 1,000 beds will be set up at the Javits Center, where Gov. Andrew Cuomo had requested they go.

The president also said he activated the National Guard in the state and that the federal government will fund 100 percent of the deployment. States normally would cover 25 percent of the cost. He said the governor would remain in command.

Hours earlier, Cuomo urged the federal government to do more to help New York as it battles a coronavirus outbreak, formally asking the Army Corps of Engineers to build temporary hospitals in New York City, Long Island and Westchester.

"That will give us regional coverage in downstate New York, which is our most heavily impacted area," the governor said.

Holding a briefing with updates on #Coronavirus. WATCH LIVE: https://t.co/sq3V2qRM8e

Cuomo said he was asking FEMA to build four field hospitals at the Javits Center and that each hospital would have 250 beds.

"We are ready to go as soon as the federal government is ready to go," Cuomo said.

The facilities are open. No red tape. In my point of view, construction could start tomorrow.

Cuomo said New York doesn't have the money to fight the outbreak alone and requested the federal government cover 100 percent of the cost for the National Guard under a federal emergency declaration, which Trump agreed to.

Cuomo said to get more hospital beds all elective surgeries will be canceled starting Wednesday. He also asked hospitals to increase bed capacity by 100 percent; occupancy regulations are being waived to help get to that goal.

The state is looking to put hospital beds wherever it can, Cuomo said, including hotels, universities and nursing homes.

The number of deaths statewide is 114; at least 60 deaths have been reported in the city. Cuomo said the majority of the people who died were 70 years or older and had underlying health conditions. Cuomo initially said 374 people had died in New York; that is actually the number of U.S. deaths, according to the governor's office. 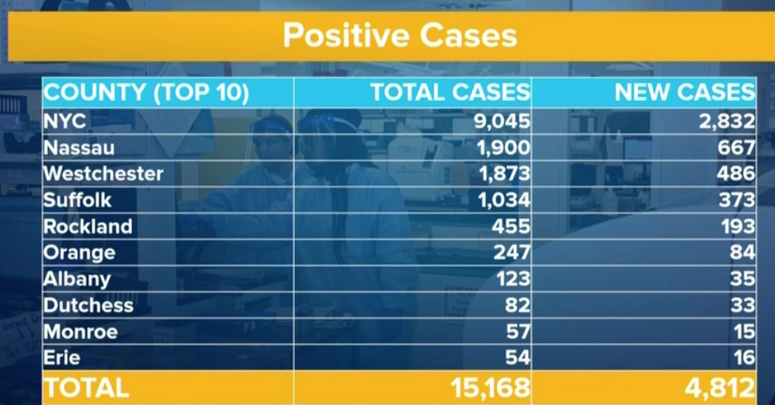 Cuomo said apparel companies are also converting into mask-manufacturing companies and that the state is exploring making masks.

The governor also said while Westchester reported hundreds of new cases Saturday, the numbers were slowing, something he credited to the containment zone around New Rochelle.

"Our hot spot of Westchester is now slowing, and that's good news," the governor said.

New York is now the epicenter of the coronavirus outbreak in the United States. Trump issued a major disaster declaration for New York, freeing up $42 billion in aid from FEMA’s disaster relief fund. Sen. Chuck Schumer said the money should be used for critical medical supplies like ventilators. "Federal funding is also available to state, tribal, and eligible local governments and certain private nonprofit organizations on a cost-sharing basis for emergency protective measures," FEMA said in a statement.

Cuomo announced sweeping orders Friday that will severely restrict gatherings of any size for the state’s more than 19 million residents and will require workers in nonessential businesses to stay home. New York’s restrictions went into effect at 8 p.m. Sunday.

“No, this is not life as usual,” Cuomo said. “Accept it, and realize it, and deal with it.”

Under the rules, nonessential gatherings of people of any size or for any reason are canceled or postponed, including parties and celebrations.

Workers seen as essential to keeping society functioning were exempt. The category was somewhat expansive, including delivery workers and convenience and liquor store clerks, along with many others including teachers, cops and health care workers.

People will be able to walk outside or take part in non-contact activities, but should not be “playing basketball with five other people,” Cuomo said.

The restrictions will ban parents from bringing kids to play dates at friends’ houses or to playgrounds, if they can’t guarantee ample space with other people.

Public transit will keep running, but people besides essential workers should only use it when absolutely necessary.

People will need to stay at least 6 feet away from others when they are out in public, Cuomo said.

Additionally, only essential businesses can have workers commuting to their jobs or in their offices, Cuomo said. The order tightens previous work-from-home restrictions and exempts a long list of businesses as essential, including health facilities, utilities, airports, food makers, grocery stores, farms, convenience stores, laundromats, funeral homes and banks.

Cuomo said there will be fines and mandatory closure for any business not in compliance.

“These provisions will be enforced” he said. “These are not helpful hints.”

Mayor Bill de Blasio said police officers would be out “reminding people, educating people, warning people” about the rules and would be empowered to break up large groups.