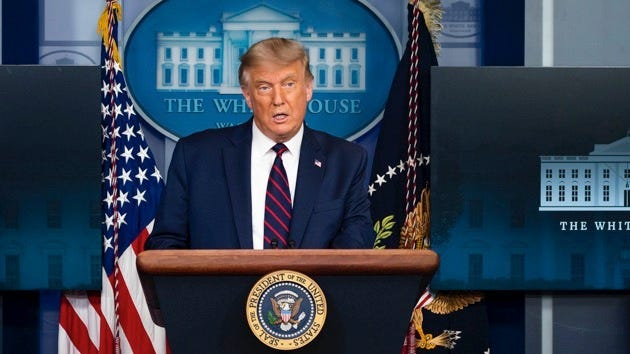 NEW YORK (1010 WINS) – A member of the Norwegian Parliament has nominated President Donald Trump for a Nobel Peace Prize weeks after he helped broker a peace deal between Israel and the United Arab Emirates.

“As it is expected other Middle Eastern countries will follow in the footsteps of the UAE, this agreement could be a game changer that will turn the Middle East into a region of cooperation and prosperity,” Tybring-Gjedde wrote in a nomination letter to the Nobel Committee.

The White House said in a statement, "This nomination comes amid widespread international support for the peace accords and optimism that the region finally may be turning a corner. By uniting two of America’s closest partners in the region—something many said could not be done—this agreement will create a more peaceful, secure, and prosperous Middle East."

The statement continued, "This peace deal is a testament to the bold diplomacy and vision of President Trump, and he is honored to be considered by the Nobel Committee. President Trump will host the Israeli and Emirati delegations for a signing ceremony of the Abraham Accords on September 15 at the White House."

Tybring-Gjedde also pointed to Trump’s “key role in facilitating contact between conflicting parties and … creating new dynamics in other protracted conflicts, such as the Kashmir border dispute between India and Pakistan, and the conflict between North and South Korea, as well as dealing with the nuclear capabilities of North Korea.”

He also noted that Trump has withdrawn many troops from the Middle East and “has broken a 39-year-old streak of American Presidents either starting a war or bringing the United States into an international armed conflict.”

Tybring-Gjedde told Fox News that “I’m not a big Trump supporter.” But he said, “The committee should look at the facts and judge him on the facts – not on the way he behaves sometimes. The people who have received the Peace Prize in recent years have done much less than Donald Trump. For example, Barack Obama did nothing.”

news
Disney World restaurant unveils new grilled cheese with doughnuts as buns
music
RADIO.COM's Postmodern Alternative with Scott Lowe
news
Open every white envelope with a blue debit card inside: It could be your latest stimulus payment
music
10-year-old drummer Nandi Bushell eyes My Chemical Romance as her next target
music
The Reel Buzz: The first trailer for the upcoming ‘Godzilla vs. Kong’ has been released
sports
NFL Championship betting Twitter: "I bet my house on my favorite player, Aaron Fraudgers"