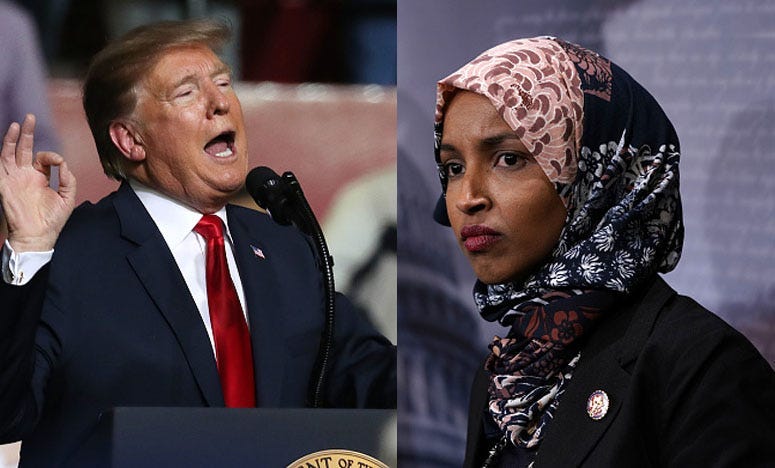 WASHINGTON (AP) — Freshman Democratic Rep. Ilhan Omar has apologized for tweets suggesting that members of Congress support Israel because they are being paid to do so. But President Donald Trump on Tuesday called her apology "lame" and said she should resign from Congress or at least not be allowed to serve on committees.

The Minnesota Democrat said she had no intention of offending anyone, including Jewish Americans, when she insinuated that lobbyists were paying lawmakers to support Israel. The remark drew bipartisan criticism and a rebuke from House Speaker Nancy Pelosi.

"We have to always be willing to step back and think through criticism, just as I expect people to hear me when others attack me about my identity," Omar tweeted. "This is why I unequivocally apologize."

Speaking to reporters during a Cabinet meeting, Trump raised the issue.

"Anti-Semitism has no place in the United States Congress," Trump said. "I think she should either resign from Congress or she should certainly resign from the foreign affairs committee."

Omar's statement on Monday was the latest reckoning among Democrats of intense differences in their ranks over the U.S.-Israeli relationship, highlighted by criticism from Omar and Rep. Rashida Tlaib of Michigan. They are the first Muslim women to serve in Congress. Pelosi and other Democrats, including leaders and chairmen, laid down a marker making clear that Omar had overstepped.

In a pair of tweets over the weekend, Omar criticized the American Israel Public Affairs Committee, or AIPAC. "It's all about the Benjamins baby," she wrote, invoking slang about $100 bills.

Asked on Twitter who she thought was paying members of Congress to support Israel, Omar responded, "AIPAC!"

That sparked Pelosi's first public rebuke of a freshman lawmaker who had helped flip the House from Republican control and is part of a record number of women in Congress.

"Congresswoman Omar's use of anti-Semitic tropes and prejudicial accusations about Israel's supporters is deeply offensive," Pelosi said in a statement issued by her office and signed by other Democratic leaders after a bipartisan backlash against the Minnesota Democrat. "We condemn these remarks, and we call upon Congresswoman Omar to immediately apologize for these hurtful comments."

It also was a stark exposure of an increasingly tense split among Democrats over U.S.-Israeli policy ahead of the 2020 elections. None of the Democratic presidential hopefuls weighed in publicly as their party's House leaders chastised Omar.

"There is an expectation of leaders — particularly those with a demonstrated commitment to the cause of justice and equality — that they would be extremely careful not to tread into the waters of anti-Semitism or any other form of prejudice or hate," House Judiciary Committee Chairman Jerrold Nadler of New York said in a statement. "Rep. Omar failed that test of leadership with these comments."

Republicans called on Democrats to strip Omar of her seat on the House Foreign Relations Committee, but Chairman Eliot Engel stopped just short of that. He said in a statement that he expects his committee members to discuss policies on merits. And though he did not name Omar, he left little doubt that his statement was a response to her tweets.

"It's shocking to hear a Member of Congress invoke the anti-Semitic trope of 'Jewish money,'" Engel said.

Asked on Air Force One en route to El Paso, Texas, about the controversy, President Donald Trump said the freshman congresswoman "should be ashamed of herself" for the tweets.

"I think it was a terrible statement, and I don't think her apology was adequate," he said. Asked what she should have said, Trump replied: "She knows what to say."

AIPAC is a nonprofit organization that works to influence U.S. policy toward Israel. While it is barred from directly donating to candidates, it encourages its more than 100,000 members to do so and to be politically active.

One way the organization has made a mark on Congress is through expense-paid junkets to Israel, which are paid for by an affiliated nonprofit that does not have to disclose its donors. The popular weeklong excursions for members of Congress, their families and some senior staff can cost upward of $12,000 per person and are intended to "educate political leaders and influencers about the importance of the U.S. - Israel relationship through firsthand experiences."

The nonprofit responded Sunday night: "We are proud that we are engaged in the democratic process to strengthen the US-Israel relationship. Our bipartisan efforts are reflective of American values and interests. We will not be deterred in any way by ill-informed and illegitimate attacks on this important work."

Omar supports a movement known as BDS, for "boycott, divestment and sanctions" aimed at Israel. And it's not the first time she's fought accusations of anti-Semitism. She insists her rejection of the Israeli government refers to its stance toward Palestinians and is not directed at Jewish people.

Omar has expressed regret for tweeting in 2012: "Israel has hypnotized the world, may Allah awaken the people and help them see the evil doings of Israel." She said the statement came in the context of Israel's treatment of Palestinians in the Gaza Strip.

"It's now apparent to me that I spent lots of energy putting my 2012 tweet in context and little energy in disavowing the anti-Semitic trope I unknowingly used, which is unfortunate and offensive," she tweeted last month.

The controversy over Omar's remarks stretched beyond Capitol Hill to the crowded Democratic presidential race.

Less than a week earlier, all but one high-profile Democratic senator eyeing the White House in 2020 voted against a Middle East policy measure that included a provision cracking down on BDS activism against the Israeli government.

Minnesota Sen. Amy Klobuchar supported the Middle East bill, while her potential presidential rivals — Sens. Elizabeth Warren of Massachusetts, Kamala Harris of California, Cory Booker of New Jersey, Kirsten Gillibrand of New York, Bernie Sanders of Vermont and Sherrod Brown of Ohio — all opposed it. Several of those Democrats had raised concerns that the bill's bid to rein in anti-Israel boycott efforts risked violating the constitutional rights of activists, although all the senators are opposed to the Palestinian-led push itself.

Among the yellow notes of support posted on Omar's office nameplate on Capitol Hill on Monday was one that read, "Mazel Tov."