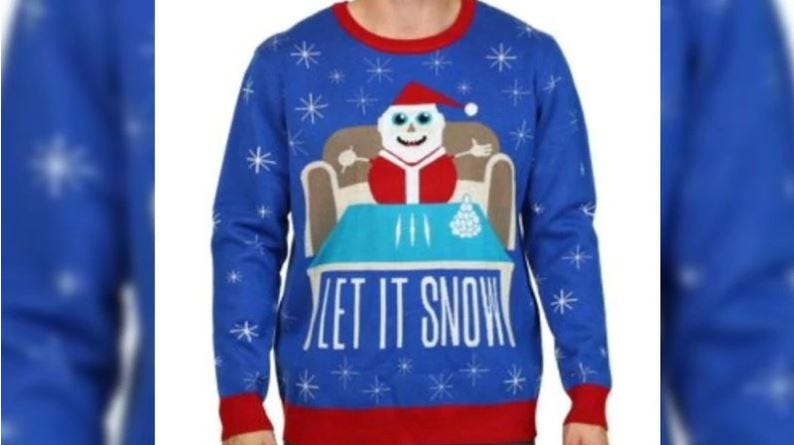 NEW YORK (1010 WINS) -- Online shoppers hunting for an ugly Christmas sweater on Walmart's Canadian website got a surprise when they came across a sweater that wasn't only ugly -- but depicted Saint Nick as a cocaine user.

The sweater features the phrase "Let It Snow" emblazoned across the front, with an image of a creature wearing a Santa hat -- and three lines of white substance in front of him.

Although cocaine is never mentioned, it's clearly a reference to the drug.

And if you think people are over reacting to the sweater or seeing something that isn't there, the description confirms it is indeed supposed to be cocaine: "It’s white, powdery and the best snow comes from South America. That’s bad news for jolly old St. Nick, who lives far away in the North Pole. That’s why Santa really likes to savor the moment when he gets his hands on some quality, grade A, Colombian snow. He packs it in perfect lines on his coffee table and then takes a big whiff to smell the high quality aroma of the snow.”

Not surprisingly, the retailer pulled the sweater once it became aware of it.

“These sweaters, sold by a third-party seller on Walmart.ca, do not represent Walmart’s values and have no place on our website,” a spokesperson for Walmart said. “We have removed these products from our marketplace. We apologize for any unintended offense this may have caused.”