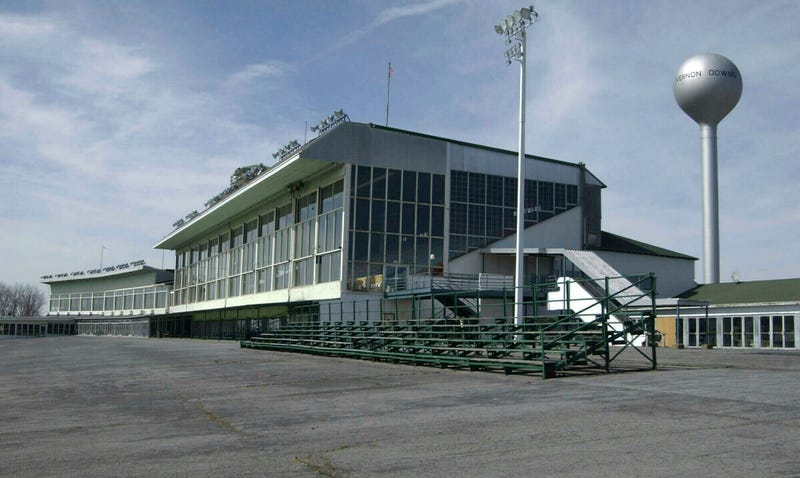 Photo credit FILE - This March 30, 2004 file photo, shows the grand stands at Vernon Downs in Verona, N.Y. Oneida County Sheriff Rob Maciol is among the local officials and residents expressing concerns about upstate New York’s Vernon Downs harness track and casino hosting the 50th anniversary Woodstock festival Aug. 16-18. Vernon Downs could host up to 65,000 people, as opposed to the 150,000 planned for Watkins Glen, and it would not feature camping. (AP Photo/Kevin Rivoli, File)
By 1010 WINS

There was a lack of planning documents included in the application, which was submitted late, according to Vernon town attorney Vincent Rossi.

“Each application submitted, one for each of the three days, was one page long with no supporting materials,” he said. “The submission was obviously inadequate.”

Holding the Woodstock 50 festival at a horse track on short notice could be a safety risk, Oneida County Sheriff Rob Maciol said.

Maciol is among the local officials and residents expressing concerns about Vernon Downs harness track and casino hosting the anniversary festival Aug. 16-18.

The track belatedly emerged as a possible festival site after the original venue, Watkins Glen International, pulled out last month.

A festival at Vernon Downs could host up to 65,000 people, as opposed to the 150,000 planned for Watkins Glen, and it would not feature camping.

But some residents of the largely rural area told a packed Vernon town board meeting Monday night that they're worried about safety and traffic. Maciol told the crowd that it would be impossible to ensure public safety in about 40 days.

Woodstock 50 president Greg Peck had said Tuesday that the group is working with law enforcement and public safety officials to address concerns.

"We are confident that this careful planning and consideration of community concerns will result in a safe, world-class festival," Peck said in a prepared release.

The festival has faced other setbacks, including the losses of a financial partner and a production company.

State health officials said last month they had received a mass gathering permit application for the festival. But they said Tuesday that type of permit was not required since there will be no camping.

The festival still needs to ensure it meets public health requirements for public gatherings of more than 5,000 people and must obtain a permit.