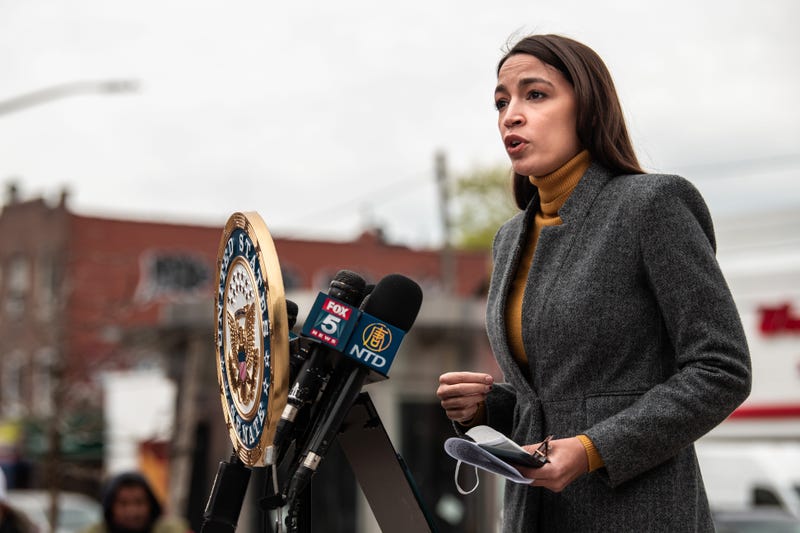 NEW YORK (1010 WINS) – Rep. Alexandria Ocasio-Cortez explained Wednesday morning why she supports calls to “defund the police” amid nationwide protests over policing and racism in America.

Rep. Alexandria Ocasio-Cortez speaks out in an @ABC News exclusive interview about President Donald Trump’s tweet about a protester and why she supports calls to defund police.@AOC@GStephanopoulos https://t.co/219hrZ1V84 pic.twitter.com/J9lnK5o5le

On "Good Morning America" Wednesday, Ocasio-Cortez told George Stephanopoulos that the budgets of the NYPD and other police departments have ballooned, while other areas like health care haven’t gotten the investments they need.

“The New York City police department has a $6 billion dollar a year budget. That is more than we spend on youth, housing, health care and homelessness combined in New York City,” she said.

“So, the problem is not a lack of resources here. In fact, many folks here in our community say that the problem is the opposite, that not enough resources are being put into the very kinds of social programming and investments that prevent crime and social discord in the first place,” she said.

Lots of DC insiders are criticizing frontline activists over political feasibility and saying they need a new slogan.

But poll-tested slogans and electoral feasibility is not the activists’ job. Their job is to organize support and transform public opinion, which they are doing.

Ocasio-Cortez said that “in a lot of different places in America, we experience very different realities with the police.”

AOC said defunding can “show up in multiple ways,” not just in reducing the number of officers in communities.

“When it comes to funds, it’s not always about the officers on the street. It’s about these police precincts that have tanks. That have military weaponry, and frankly, have a degree of material resources and war-like weaponry, that people ask, ‘Why does a local police precinct have this in the first place?’” she said.

Asked by Stephanopoulos if the slogan “defund the police” got in the way of the argument being made, AOC said it’s up to elected officials to listen to what communities are saying.

“Just a few years ago, everyone said that ‘Black Lives Matter’ polled poorly, that it was divisive, that it required too much explanation,” she said. “These are everyday people going out into their communities and saying, 'This is what we want for ourselves and for our city council budgets,'” she said.