NEW YORK (1010 WINS) – A man walked into a Brooklyn church during Mass on Sunday and poured juice all over the altar and tossed juice at a priest —a brazen act caught on surveillance video that the Brooklyn Diocese is calling a "heinous act of religious intolerance."

During the 9:30 a.m. mass, the man entered St. Anthony of Padua on Manhattan Avenue in Greenpoint as Father Jossy Vattothu was preparing communion, according to the Brooklyn Diocese.

Alarming video released by the Diocese shows him pouring a red liquid, said to be a juice, onto the altar right in front of the priest. 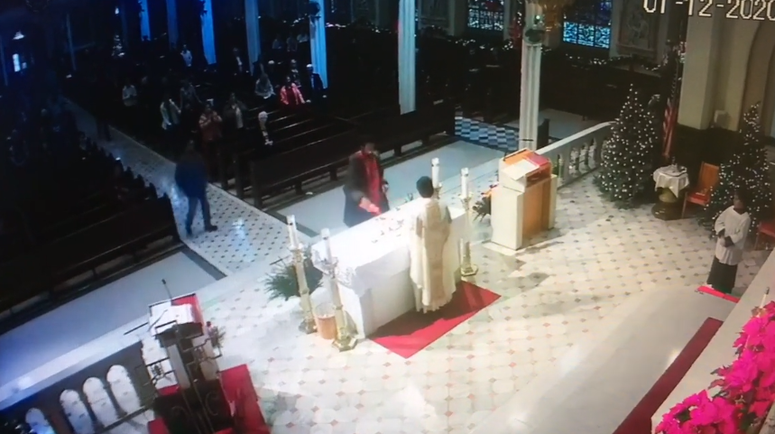 “During my years as a priest, nothing like this has ever happened,” Father Vattothu told ABC7. “At first, as he approached the altar, I thought he had something to tell me. It is a miracle that the bread and wine were not damaged, and I was able to continue the Mass, consecrating the bread and wine into the body and blood of Jesus Christ.”

Police took the man into custody at the church a short time later. It’s unclear what charges he faces.

Monsignor Anthony Hernandez, chancellor of the Brooklyn Diocese, told ABC7 that people are frightened amid a wave of hate-based attacks in the borough recently.

“I think right now, people are scared given the current environment of anti-Semitic and anti-Catholic incidents. People are afraid to go to their house of worship,” Hernandez said.