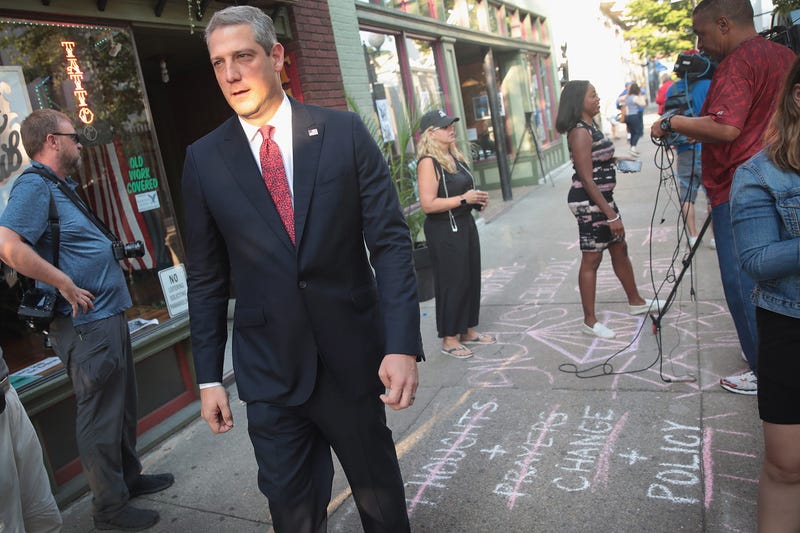 Ryan, the Ohio congressman-turned-Democratic presidential candidate, announced on Wednesday that he's teamed up with the grassroots anti-gun violence group Moms Demand Action to lead a group Thursday to the Senate Majority Leader's hometown of Louisville, Kentucky, to hammer home the point that he needs to act on gun control legislation.

The move follows weekend mass shootings in El Paso, which left 22 dead, and in Ryan's home state in Dayton, which left 9 dead. (In the photo above, Ryan visits Dayton's Oregon District, where the mass shooting happened.)

"I'm leading a Caravan for Change from Ohio Kentucky w/ @MomsDemand," Ryan, who entered the presidential race in April, tweeted. "We're going to make sure Mitch McConnell knows that the Senate needs to vote on the House-passed gun reform bills. We cannot wait any longer."

TOMORROW, I'm leading a Caravan for Change from Ohio ➡️Kentucky w/@MomsDemand. We're going to make sure Mitch McConnell knows that the Senate needs to vote on the House-passed gun reform bills. We cannot wait any longer.

Join us at one of these stops as we head to our KY Rally. pic.twitter.com/yIfyVVpuXf

Ryan donates blood at the Community Blood Center on August 05, 2019 in Dayton, Ohio. The center put out a call for donations following yesterday's mass shooting in the nearby Oregon District. (Getty Images)

During a CNN interview Wednesday morning, Ryan said, "We're going to make sure that Mitch McConnell knows that there are two pieces of legislation sitting on his desk that he needs to bring up for a vote to actually get some action ... (to let McConnell) "know that we're very, very serious about what's happening here."

He continued, "Get your culiones, OK, grab 'em, and do something, because the American people are fed up with you stonewalling everything ... People are dying on the streets just a couple hours from your house, and you're sitting there doing nothing."

And Ryan didn't mince words: "Get off your ass, and get something done. We're fed up."