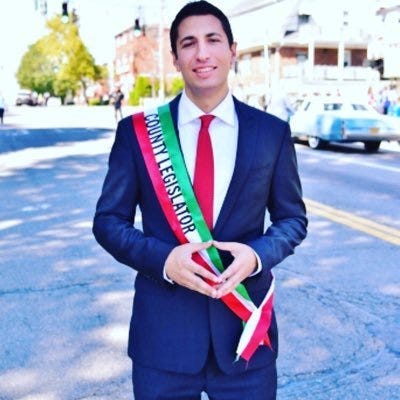 YONKERS, N.Y. (AP) -- The only remaining Republican member of the legislative body in Westchester County, once a Republican stronghold, said he will switch his registration to the Democratic Party.

Westchester County legislator David Tubiolo, 32, told The Journal News he was switching his registration on Friday in advance of the state's Feb. 14 deadline to change parties in time to vote in the Democratic primary. He doesn't know who he's voting for for president yet.

Tubiolo's departure gives Democrats a 16-1 majority on Westchester's Board of Legislators. The body's minority caucus will now consist of Legislator Margaret Cunzio, a member of New York's Conservative Party.

Westchester County was considered a quintessentially Republican area through most of the 20th century. But voters in the county started to tilt toward the Democratic Party in the 1990s and chose Democrat Hillary Clinton over Republican Donald Trump by more than 2 to 1 in 2016.

Tubiolo said Trump was one of many factors that fueled his decision to leave the Republican Party. He lamented the disappearance of the moderate brand of Republicans nicknamed Rockefeller Republicans after former New York Gov. Nelson Rockefeller.

"They slowly disappeared or they got pushed out of the party,'' Tubiolo said. "I always viewed myself more of that kind of mold and I don't feel I have as much of a home anymore.''