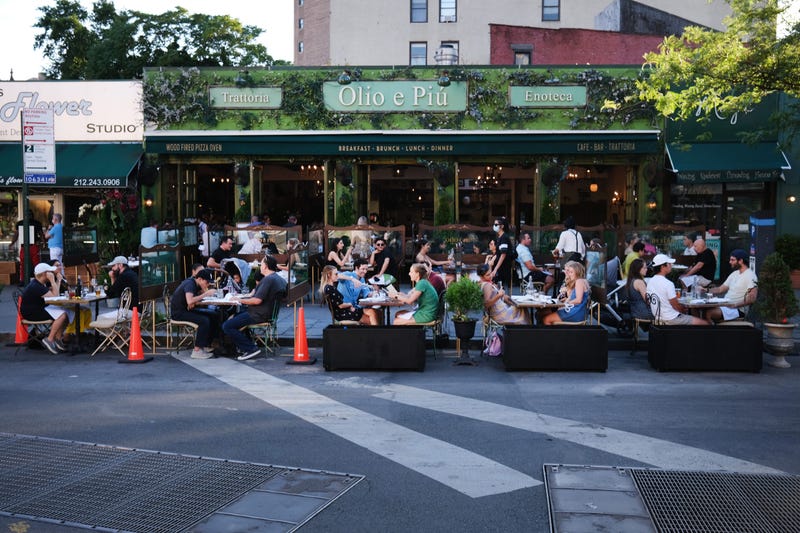 NEW YORK (1010 WINS) – Mayor Bill de Blasio said Friday that the city was still on track to enter Phase 3 of its reopening on July 6, including the return of indoor dining at restaurants, as well as personal care businesses like massage parlors and nail salons.

The mayor said Phase 3 includes “businesses that a lot of people care about.”

“They are everyday businesses in your neighborhoods that really help you take care of yourself,” he said.

Earlier this week, the city entered Phase 2, which allowed the reopening of offices, in-store retail and outdoor dining, as well as barbers and beauty parlors, among other businesses. Manufacturing and construction started under Phase 1.

Under Phase 3, restaurants are also permitted to have indoor dining at 50 percent capacity, with social distancing and face coverings in place.

The mayor said there have been 5,500 applications for outdoor dining across the city already. He also announced that the city was expanding its Open Restaurants initiative to include Open Streets, allowing restaurants to expand into streets and even take up an entire block for a period of time each day.

The city aims to have restaurants operating on up to 40 Open Streets by July 17, Trottenberg said.

At his briefing Friday, de Blasio again warned that the city may have to lay off up to 22,000 workers on Oct. 1 if it doesn't get the financial assistance it needs amid a revenue shortfall of $9 billion and a budget deadline at the end of this month. De Blasio proposed a $95 billion budget in February before paring it down to $87 billion amid the coronavirus crisis, with the city still looking to make $1 billion in cuts.

"We still haven’t gotten the help yet. There’s no stimulus from Washington. We’re still working on a borrowing plan with Albany," de Blasio said. "A lot of coversations going on, working hard there, but we don’t have anything yet to tide us over and we’re still another $1 billion short."

The mayor called the number of potential layoffs "staggering" and said "we have not seen layoffs like that since the 1970s."

The city originally asked for $7 billion in borrowing from Albany, de Blasio said, but it's now asking for $5 billion over two years—$3 billion for the coming fiscal year and $2 billion more for the fiscal year after that.

The mayor also brought up the issue of evictions, saying "keeping a roof over people’s head is crucial right now."

He urged the state to extend its full eviction moratorium through Aug. 20 and to allow tenants who miss rent to repay it over 12 months.

The mayor said tenants should be allowed a payment plan over a year to catch up “when they finally have a livelihood again.”

“You cant ask people to create money they don’t have,” he said.