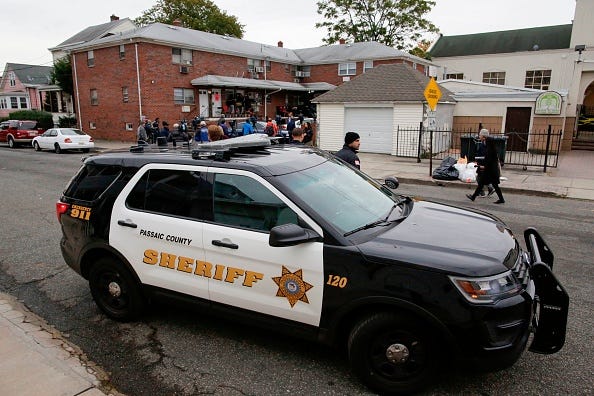 PATERSON, N.J. — A dozen members of a local Crips sect in New Jersey were arrested for distributing approximately 50,000 doses of heroin and a kilo of crack cocaine per week on Paterson’s streets, the state announced Thursday.

Officials arrested alleged leaders, members, and associates of the “42-50” set of Crips — named after the address of a building on Paterson's Auburn Street where they operated out of.

The crew is accused of possessing guns in addition to drug trafficking in what Attorney General Gurbir Grewal called "open air drug markets", an area known as "a hot spot for shootings involving rival gangs, including shootings targeting members of the 42-50."

An investigation led to the seizure of 21,000 wax folds of heroin, some of which also contained fentanyl, as well as over a kilo of crack cocaine.

Investigators also reported discovering a heroin mill inside a building on North York Street where the gang allegedly cut and packaged the heroin for sale along with a crack cocaine mill inside a Summer Street an apartment on Summer Street.

Investigators believe 50,000 doses of heroin and a kilo of crack cocaine per week was distributed by the 42-50.

The heroin seized in is said to have been stamped with the same brand names connected to eight fatal and 14 non-fatal overdoses in New Jersey.

Two alleged leaders of the 42-50, Marvin Goodwin, 29, and Terike Gass, 40, were charged with managing the drug ring and are charged with five others on first-degree racketeering charges.

Gass and three other men face first-degree charges of maintaining or operating a drug production facility and possession of cocaine with intent to distribute.

"Through collaborative investigations such as 'Operation 42-50,' we are targeting the drug traffickers who profit from the deadly opioid epidemic and bring violence to the neighborhoods of our cities," said AG Grewal.

"Paterson is a regional distribution center for heroin and fentanyl, and this Crips set was running its open-air drug markets in an area torn by gang-related gun violence. We will continue to work closely with the Paterson Police Department to eliminate these criminal organizations that are destroying so many lives," he added.

"In the midst of the COVID pandemic, there is still an opioid crisis and we are still doing all that we can to help those suffering from addiction," Grewal said. “Meanwhile, drug dealers are continuing their corrosive commerce, despite the pandemic, bringing death and destruction to our communities. We are determined to bring these ruthless profiteers to justice."