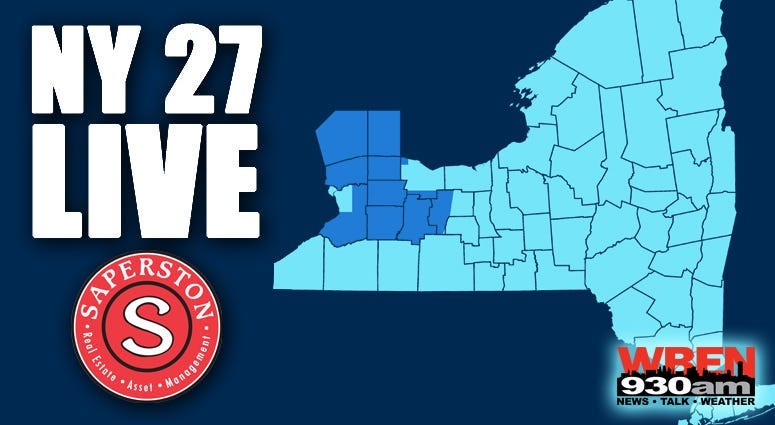 June 23, 2020 06/23/2020 8:00 am
Buffalo, NY (WBEN) - It is a local election for the history books.  A special election and Republican primary race for the same congressional seat and oen of the candidates appearing in both elections.  Today is the day voters in NY27 cast their ballots not only to determine who will represent them until January, but who will represent the GOP in the general election in November.

WBEN's David Bellavia, once considered a top GOP candidate for the district, says the primary has more excitement than the special election. "Even though these will be two separate lines, it's almost leading into the general election. The primary opponents seem to be hitting (Chris) Jacobs harder than anything Nate McMurray is doing at the moment," says Bellavia, referring to Beth Parlato and Stefan Mychajliw.

Overall, this is garnering a lot of interest, says Bellavia. "We don't really have a whole lot to talk about right now. There are no sporting events out there, and some people look at politics as a parlor game. This is something that captivates you because it's the only thing locally we've had to talk about aside from protests in the city of Buffalo," explains Bellavia. He says absentee ballots will lead to a larger turnout than primaries or general elections in the past, becauee of the COVID 19 pandemic allowing voters to mail in ballots.

Bellavia believes it will be a double win for Jacobs. "In the race for second place, it's anyone's guess. With Stefan Mychajliw's name recognition in Erie County, it's hard to beat that, so it's a race between Jacobs and Mychajliw, with Jacobs winning," predicts Bellavia, and Bellavia prdicts Jacobs will defeat McMurray.

The NY27 congressional district is expansive and spans multiple counties across the western region of New Yotk State, excluding the city of Buffalo. It is a vastly suburban and rural congressional district and interest doesn't appear to be as high in outlying areas like Genesee County. "Number one, people aren't used to voting in June. We have the virus out there where people are careful about being out socially," says GOP chairman Richard Siebert. "The virus is the big issue here as it is throughout WNY."

Siebert estimates 7,000 absentee ballots will be counted. "People are taking advantage of it big time," says Siebert adding people are not taking chances with COVID19. "Our early voting has been very slow. We'd be lucky if we saw 400 during the early voting period," adds Siebert.