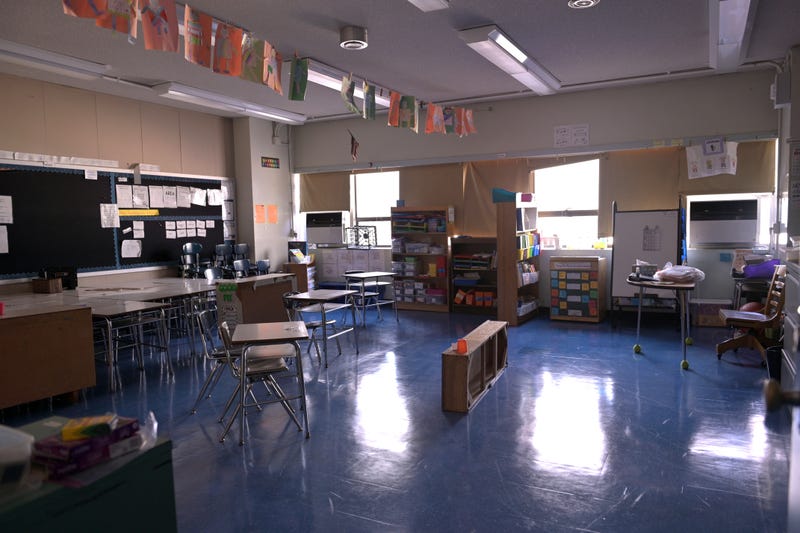 A classroom is empty with the lights off on what would otherwise be a blended learning school day on November 19, 2020 at Yung Wing School P.S. 124 in New York City. Photo credit Michael Loccisano/Getty Images
By Adam Warner

NEW YORK (1010 WINS) -- Council member Joe Borelli and Staten Island parents are suing to reopen public schools shuttered by the city amid a spike in the COVID positivity rate.

Borelli said Saturday that he and the parents were seeking an emergency injunction to reopen schools, which pivoted to all-remote learning on Thursday after the city’s seven-day positivity rate hit a 3% threshold.

Last night, we filed our 2nd lawsuit in an attempt to keep in-person learning @ #NYC schools. The DOE has done a good job, yes a good job!, keeping children & staff safe in school buildings & the medical & scientific consensus is that schools are not super spreaders. pic.twitter.com/s00Bj2sCSD

“Mayor de Blasio and Chancellor (Richard) Carranza have continued to fail our children time and time again. Even though they had six months to prepare for this school year, they failed to do so and our children are forced to pay the price,” Borelli said in a statement.

“Remote learning has proven to be a failure and now they have taken the extra step of closing the schools completely. This is utterly irresponsible and unacceptable,” the Republican councilman said.

Borelli said the Department of Education “has done a good job … keeping children and staff safe in school buildings” this school year. “The medical and scientific consensus is that schools are not super-spreaders,” he tweeted along with his statement announcing the suit.

The councilman said remote learning is doing “irreparable harm to students” and “is simply not working.”

The lawsuit, filed in Manhattan federal court Friday night, is the second lawsuit filed by Borelli and parents. Last month, they filed a class action lawsuit against the DOE in Richmond County Supreme Court in a bid to bring back in-person learning full-time.

De Blasio said he hopes to reopen schools as soon as possible with new safety protocols in place but that the city had an obligation to stick with the benchmark it set for temporarily closing schools.