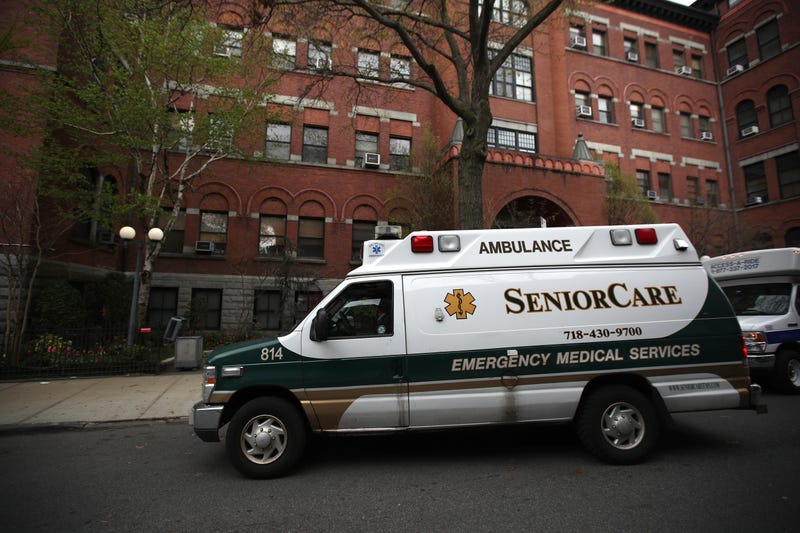 An ambulance pulls up outside of the Cobble Hill Health Center on April 18, 2020 in the Cobble Hill neighborhood of the Brooklyn borough of New York City. Photo credit Justin Heiman/Getty Images
By 1010 WINS Newsroom

NEW YORK (1010 WINS) -- A mock funeral for Gov. Andrew Cuomo’s “leadership and integrity” will be held in Brooklyn on Sunday by family members of people who died of COVID in New York nursing homes.

Relatives will stage the protest outside of the Cobble Hill Health Center, which reported dozens of COVID-related deaths during the outbreak.

Organizers plan to have a hearse with a casket full of torn pages from the governor’s new book, “American Crisis: Leadership Lessons from the COVID-19 Pandemic,” the New York Post reported.

There will be 6,500 pages in the casket, representing the number of deaths in the state's nursing homes linked to COVID.

“Ultimately we want an apology and we don’t want it to be buried and hidden and forgotten. Thousands upon thousands of people died — couldn’t have burials,” Daniel Arbeeny told the Post. His father is among those who died at Cobble Hill.

Rich Azzopardi, a spokesman for the governor, told the Post in response: “We mourn with every family who lost someone during this pandemic and hope they look past the misinformation and outright lies that have been manufactured by right-wing ‎agitators and their allies looking to cover for the federal government’s many, many failures.”

“The fact remains that every state across the nation is grappling with how to keep nursing home patients safe and tackle the root cause of infections — asymptomatic staffers who through no fault of their own bring in the virus,” Azzopardi said.

Cuomo, who has been praised for leadership that helped flatten the curve of infections in New York, has also been criticized over his handling of nursing homes, specifically the March order that told homes they could not refuse to accept recovering COVID-19 patients from hospitals as long as the patients were “medically stable.”

The directive was intended to free up hospital beds for the sickest patients as cases surged. But relatives, patient advocates and nursing home administrators have called it a misguided decision, blaming it for helping to spread the virus among the state’s most vulnerable residents.

Cuomo reversed the order under pressure on May 10 but has repeatedly defended it.