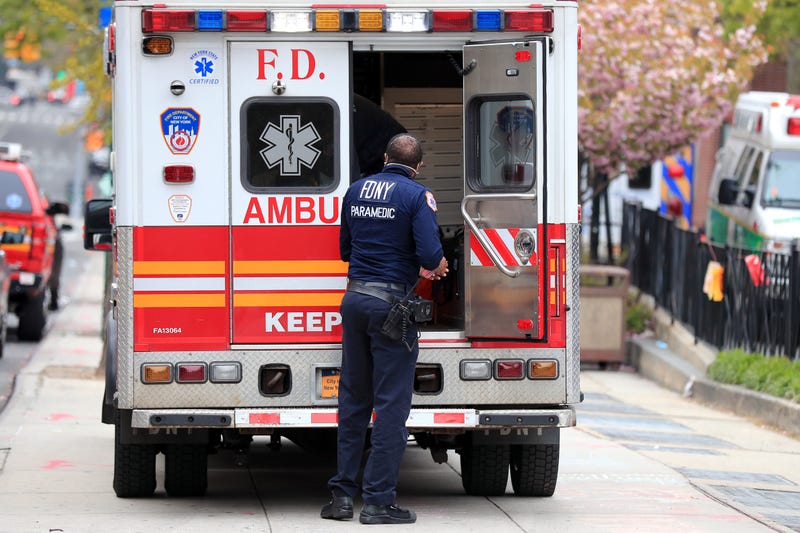 An FDNY paramedic unloads a patient from an ambulance near the Emergency Room entrance to the Brooklyn Hospital Center. Photo credit Mike Lawrie/Getty Images
By Adam Warner

NEW YORK (1010 WINS) -- The FDNY reportedly won’t require its members to get a COVID vaccine when it becomes available.

The first doses of a vaccine are expected to be distributed as early as next month pending emergency use authorizations by the FDA. Emergency responders would likely be among the first to be vaccinated.

But getting the vaccine will be voluntarily for FDNY firefighters and medics, according to the New York Post, which cited an internal department memo.

In the memo, Commissioner Daniel Nigro and Chief of Department John Sudnik wrote, “Vaccination will NOT be mandatory, but the Department recommends that members consider the overall benefits.”

Asked about the memo, FDNY spokesman Frank Dwyer told the Post, “There is currently no legal requirement for anyone to take a COVID-19 vaccine.”

Two FDNY unions told the Post that they agreed with the FDNY’s stance on voluntary vaccines but noted they didn’t push for it.

“Members should take the opportunity to get the vaccine if it makes them feel safer, but it should be an individual choice,” Local 2507 President Oren Barzilay said.

Uniformed EMS Officers Union President Vincent Variale said, “We’ve always been against mandatory vaccination of members. Our position is that everybody has a right to decide what they want to put in their bodies, and nobody should be forced to take something they don’t agree with.”

The vice president of the Uniformed EMS Officers Union, Anthony Almojera, told the Post that, “As long as the vaccine is proven safe and effective, we will implore as many people as possible to get it for their personal safety as well as the safety of their families and the patients they take care of.”