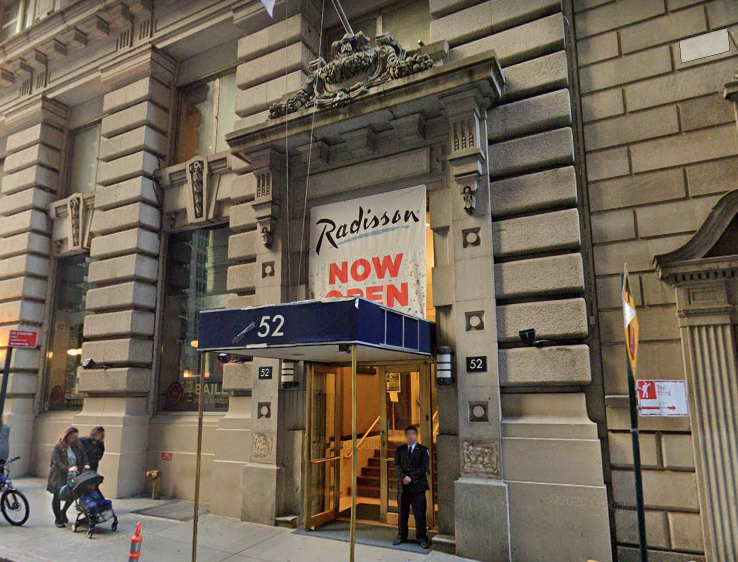 NEW YORK (1010 WINS) -- A newly-formed group of residents and business owners filed a lawsuit against Mayor Bill de Blasio on Wednesday seeking to stop the city from moving more than 200 homeless men from a hotel on the Upper West Side to a hotel in the Financial District.

De Blasio announced plans to relocate some of the men from the Lucerne Hotel on the Upper West Side to a Radisson Hotel in FiDi last month, after a group of Upper West Siders campaigned for the move, claiming the men were a threat to their safety and quality of life.

In its lawsuit, Downtown New Yorkers said it opposed what it called “(the city’s) misguided attempt to exploit the COVID-19 emergency by hastily moving forward with the proposed transfer to cover up for their public relations disasters, which began when they mishandled the movement of the men to the Lucerne Hotel Shelter.”

The decision to move the men to the Radisson was “a response to protests on the Upper West Side, not to protect the public health,” the suit claims.

A spokesman for the Department of Homeless Services on Wednesday confirmed that the city will be relocating the men currently staying at the Lucerne to FiDi temporarily in mid-October.

Project Renewal, a Manhattan-based nonprofit organization, will provide the men with the services they need while they are living there, he said.

Manhattan Community District 1, which includes FiDi, currently houses no “traditional” homeless shelters, he noted. The city eventually plans to convert the Radisson into a borough-based shelter that will serve homeless families

A spokesman for the city’s Law Department, meanwhile, said the city “has a moral and legal obligation to provide safe shelter to all who need it.”

“This shameful attempt to dodge that obligation through a technical procurement challenge will fail in court,” he said in a statement. “Using this hotel to provide shelter during this unprecedented pandemic is not only a justified use of the mayor’s emergency powers, it is absolutely the right thing to do.”