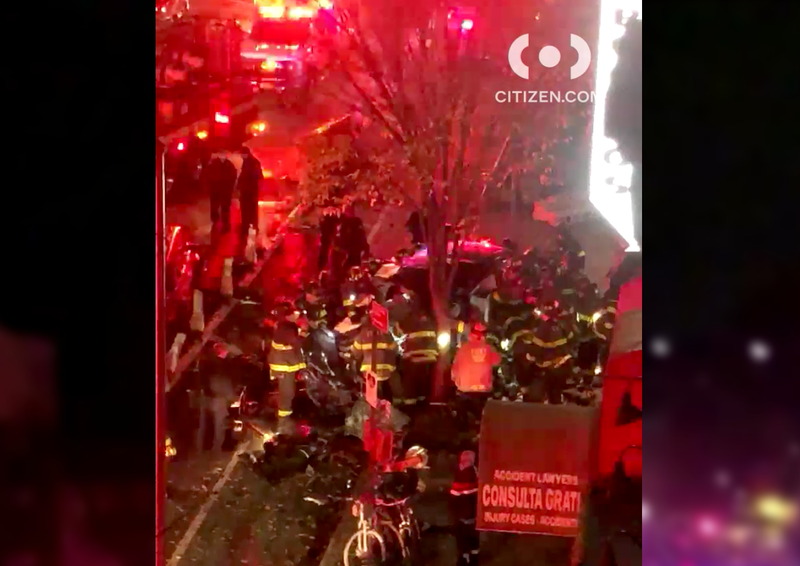 NEW YORK (1010 WINS) -- A man was killed blocks from his home when his minivan was struck by an out-of-control BMW in a chain-reaction crash in Brooklyn on Wednesday morning, police said.

The crash involved three vehicles at Grand Street and Manhattan Avenue in Williamsburg around 1:15 a.m.

Police said the tire of a white BMW X7 SUV blew out on Grand Street, causing the driver of the vehicle to cross into oncoming traffic.

The BMW struck a black Honda Odyssey and then a red Honda Element. The BMW and Honda Element came to halt in the street, but the Odyssey crashed into a tree, police said.

The driver of the Odyssey, 26-year-old Alexander Ulloa-Toribio of Brooklyn, was found unconscious with severe body trauma after his vehicle struck the tree.

Citizen App video shows members of the FDNY surrounding the Odyssey next to the tree.

Ulloa-Toribio was rushed by EMS to Woodhull Hospital, where he was pronounced dead.

The 30-year-old driver of the BMW and his 30-year-old passenger suffered minor injuries and were taken to Bellevue Hospital, where they were treated and released.

The driver of the Honda Element, a 34-year-old man, refused medical attention at the scene.