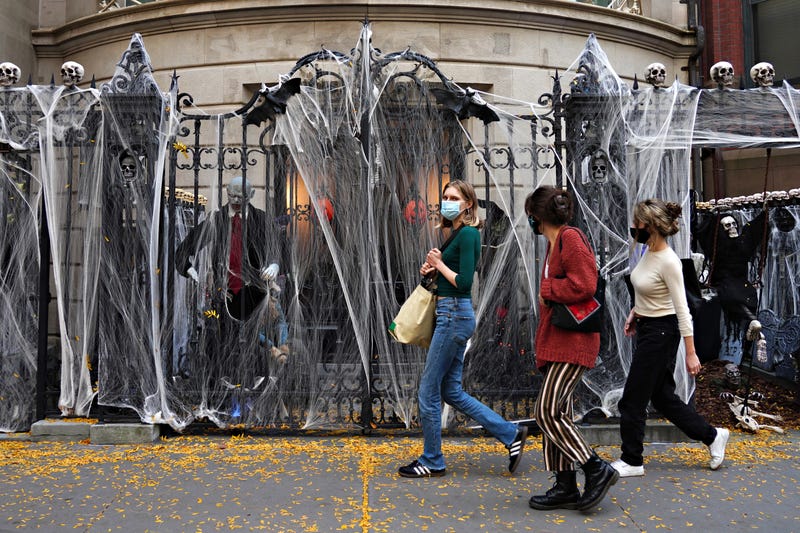 People walk by Halloween decorations outside of an Upper East Side home on October 24, 2020 in New York City. Photo credit Cindy Ord/Getty Images
By The Associated Press

Tens of thousands of Halloween revelers usually pack the streets of downtown Manhattan for the Village parade that’s been a tradition for almost 50 years.

Parade organizers have planned a virtual puppet parade this year. “Take your front row seat and enjoy this marvelous miniature Parade by some of our best artists,” they said on the parade website.

Indoor parties are too scary this year, but city officials have said outdoor trick-or-treating is fine as long as children wear coronavirus masks in addition to any masks that may be part of their costumes.

“You can be outdoors celebrating, but small groups, smart precautions,” Mayor Bill de Blasio said in a radio interview on Friday. “But no indoor gatherings. That’s just too dangerous.”

The city's most iconic building, meanwhile, has a new trick for Halloween. The Empire State Building will become a giant game of Hasbro’s Simon, to be played by anyone with a view of the building or access to its website.

The skyscraper’s lights will flash colors in patterns from 8 to 9 p.m. that players will try to remember and input correctly into their device. Up to 100,000 people can play.