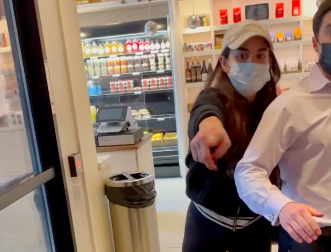 NEW YORK (1010 WINS) -- The NYPD may charge a woman who falsely accused a Black teenager of stealing her cellphone inside a Manhattan hotel with assault, and could tack on grand larceny or attempted robbery charges as well, an official said Tuesday.

At a news conference on Tuesday, NYPD Chief of Detectives Rodney Harrison said the woman caught on camera accusing a renowned jazz musician’s 14-year-old son of stealing her phone at the Arlo Hotel in SoHo was initially set to be charged with harassment once she is identified. The department, however, will likely upgrade the charges, the New York Post reported.

The woman “initially started a verbal argument of this accusation, and then tried to attack [the] teenager by grabbing for his phone, grabbing his leg and trying to tackle him,” Harrison said.

“Our victim didn’t suffer any injuries,” he said. “But his father, who he was with, received slight injuries.”

Harrison said police are “trying to track down our perpetrator at this time.”

“We believe that she lives out of state, so we’re trying to ascertain if she’s still within the New York City area,” he explained.

The Manhattan District Attorney’s office is investigating the incident as well, a spokesperson said Monday.

The encounter between the woman, the boy and his father — jazz musician Keyon Harrod — went viral after Harrod posted a cell phone video documenting part of the incident to his Instagram page.

“I’m not letting him walk away with my phone!” the woman says in the video. Harrod said the woman then scratched him and tackled and grabbed his son.

An Uber driver returned the woman’s phone to the hotel not long after the incident, according to the Associated Press.

music
HBO Max will be offering a cheaper service because 'most people … are not wealthy'
news
Family pleads for return of late son’s ashes after their U-Haul was stolen
sports
Report: Broncos LB Von Miller won’t face domestic violence charges
sports
Maia Chaka to become first Black female official in NFL history
news
WATCH: Drone photographer captures film of massive school of blacktip sharks
music
TJ Osborne shares part of his coming out process was realizing ‘there are guys out there like me’