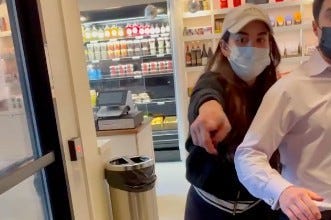 NEW YORK (1010 WINS) -- An online petition calling on the Manhattan District Attorney’s office to charge the woman who falsely accused a Black teen of stealing her phone inside a Manhattan hotel with assault has garnered nearly 100,000 signatures.

Civil rights attorney Ben Crump, who is representing 14-year-old Keyon Harrold Jr.’s family, began circulating the petition after the Dec. 26 incident. As of Monday afternoon, 99,191 people had signed it.

“The parents of Keyon Harrold Jr. and I are calling on the Manhattan District Attorney to bring charges of assault and battery against this woman, but we need your help!” Crump wrote. “Keyon Harrold Jr. will live with this trauma for life, the weight of racism on the shoulders of another generation. He deserves better than this treatment!”

The woman, identified by the New York Post as Miya Ponsetto, was caught on video tackling the teen after she accused him of stealing her iPhone.

On Saturday, December 26, the woman in this video falsely accused an innocent 14-year-old teenager of stealing her cellphone. She then proceeded to physically attack him and fled the location before police officers arrived on scene. pic.twitter.com/qtZZWetBWH

Both the NYPD and the DA’s office have said they are investigating the incident.