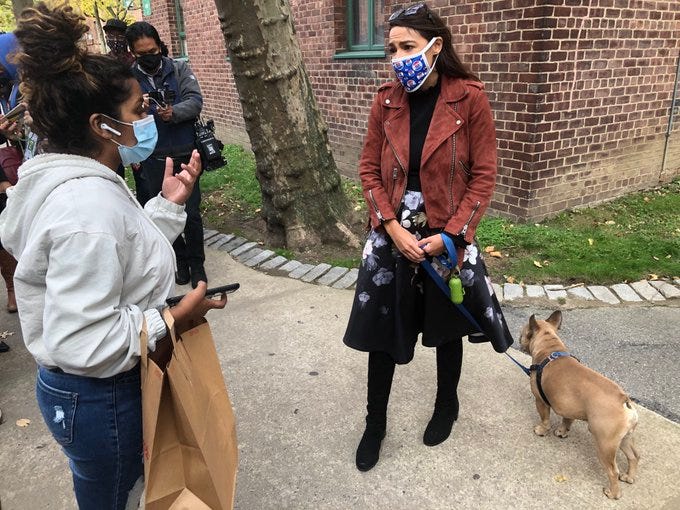 NEW YORK (1010 WINS) -- Rep. Alexandria Ocasio-Cortez cast her ballot near her home in the Bronx on Sunday, praising the high turnout but decrying hours-long lines that she said amounted to voter suppression.

The congresswoman got in line next to other early voters, her French bulldog Deco by her side.

She waited about 1 ½ hours to vote in a vacant storefront on Parkchester Road in Parkchester.

Ocasio-Cortez said she was happy so many people turned out but was concerned that voting is so hard. Some people waited three hours or more to cast their ballots at the site on Sunday.

“Just because it’s happening in a blue state does not mean it’s not voter suppression,” the Democratic rep said.

“I am thrilled to see how many people who are overcoming this injustice, waiting in the lines anyway, bringing community supplies, snacks, lawn chairs. You know, we’re going to overcome this hurdle,” she said.

Ocasio-Cortez, who is up for reelection this year, said it felt good to finally vote. She said it still hits her seeing her name on the ballot.

“It just felt really good to make a tangible step to move forward, to change our leadership where it needs to be changed and to support our leadership where they are being successful,” she said. “And, again, to see your own name on ballot, it makes me emotional every time.”