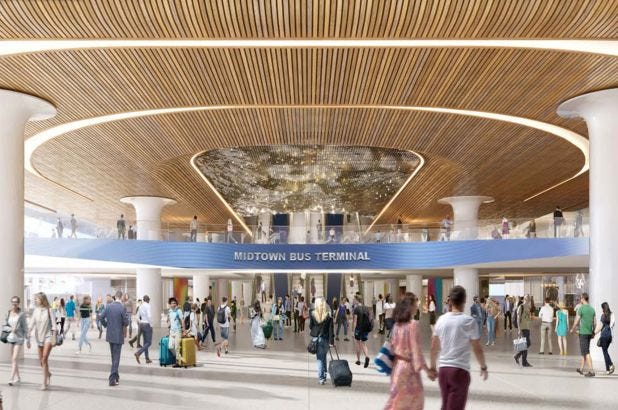 The Port Authority of New York and New Jersey unveiled a plan Thursday to rebuild and expand the embattled midtown Manhattan bus terminal.

“Everyone knows the bus terminal. Very few have anything good to say about it,” Port Authority Executive Director Rick Cotton said. “It is way past time that this building be replaced.”

The new station would be build on top of the existing one, with sleek, glass-walled entrances and added infrastructure to accommodate more buses. Ramps that stretch across several blocks would be moved, and a storage building would be built to keep empty buses off the streets.

Construction could begin in 2024, finish by 2031 and cost as much as $10 billion, the Port Authority said. About $3 billion would come from sell rights to build four commercial buildings in the area, including one atop the terminal.

The Port Authority Bus Terminal opened in 1950 at Eighth Avenue between 40th and 42nd streets near Times Square. A statue of Ralph Kramden, the fictional bus driver from “The Honeymooners,” stands outside its main entrance.

Prior to the coronavirus pandemic, the terminal handled more than 250,000 passenger trips on weekdays, many commuting from New Jersey.

Officials have debated replacing or overhauling the bus terminal for years. A prior plan to build the new terminal a block west of the current location led to a bitter dispute between the New York and New Jersey arms of the dual state agency.