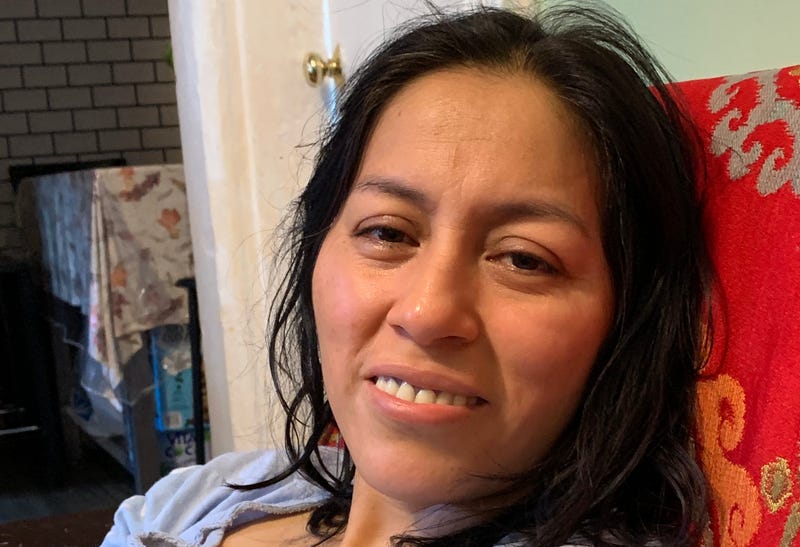 NEW YORK (1010 WINS) -- A Brooklyn woman who survived being pushed in front of an oncoming subway train in Manhattan on Thursday spoke with 1010 WINS about the horrific ordeal.

Liliana Sagbaicela, 40, said she has much to celebrate this Thanksgiving and is very grateful to be alive after a man shoved her onto subway tracks at the Union Square station seconds before a train rolled in—an attack captured on disturbing surveillance video.

Miraculously, Sagbaicela landed right in the roadbed between the rails. Two train cars passed above her a split-second later.

This is crazy! All types of lawlessness happens in @NYCTSubway. Passengers nor employees are safe! pic.twitter.com/nwNEcDr8vk

“I saw in the video, the man—oh my, God, I can’t believe it” Sagbaicela said through tears Friday. “Is this happening? Now I understand why everybody and the police say to me, ‘You are alive for the miracles. You are a miracle.”

Sagbaicela, who was at home recuperating with her husband and two daughters, ages 9 and 14, said she has no memory of the attack.

She said the last thing she remembers is getting ready to listen to Bible stories as she waited for a 5 train to take her to her cleaning job uptown around 8:30 a.m.

“What I remember, when I arrived there, I wanted to listen to my Bible, so I put it on this one, and it’s the last thing that I remember,” she said.

The next thing Sagbaicela recalls is waking up at Bellevue Hospital.

“I didn't know what happened. When I was in the hospital, I wake up, I opened my eyes and said, ‘What happened?’ I think I was dreaming, because I didn’t have an idea” she said. “Later, they cut my clothes. Later, I say, ‘What happened?’ … ‘You had accident.’”

Liliana Sagbaicela recuperates at home in Brooklyn after being run over by two subway cars at the Union Square station. She said the man who pushed her to the tracks must be “crazy.”She suffers dizziness and has 8 stitches on her head. She remembers nothing. #1010WINS pic.twitter.com/CChDdKVT3R

Sagbaicela, who spent about five hours in the hospital, said she received eight stitches to the right side of her head and has some dizziness and trouble walking. But doctors told her she will recover.

She said of the stranger who pushed her: "I think he's crazy."

The 24-year-old suspect, Aditya Vemulapati, was apprehended by a transit officer shortly after the attack. He faces several charges, including attempted murder and assault.

“It's very disturbing. We see him waiting, calculating for the train to approach the station. And at the opportune moment, he pushed the victim to the tracks,” NYPD Transit Chief Kathleen O'Reilly said Thursday.

Watch as @NYPDTransit Chief O’Reilly briefs the media on an incident at Union Square in which a female was pushed on to the tracks as a train was pulling into the station. @FDNY helped the victim off the tracks, and our officers quickly made an arrest. pic.twitter.com/ajvHWVr5mr

Police told Sagbaicela that if she doesn’t press charges as soon as possible, the suspect will be set free. She said she hopes to do that on Monday.

“The one thing he told me—he has the reason—if you didn’t put the charge, he's going to do it again. Because we got to let him free, he’s going to do it to somebody,” Sagbaicela said.

Asked if she would take the subway again, Sagbaicela said she is too afraid right now.

Thursday morning's attack came hours after a man was punched in the face and pushed onto the tracks at the 42nd Street–Bryant Park station Wednesday evening.

The man suffered minor injuries to his knee and hands and was taken to Bellevue Hospital, where he was treated and released.

Police said they had arrested a suspect in that case as well.