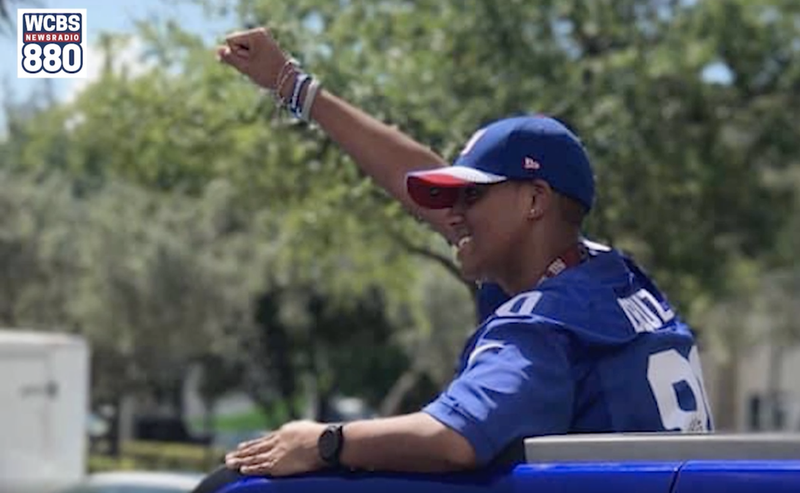 Joshua Rhodes is an 18-year-old who attended Stoneman Douglas High School – the same school tragically affected by the Parkland shooting in 2018. During his time at the school, Rhodes was diagnosed with a rare brain cancer that affects 4% of kids. Last week, he was surprised by one of his favorite football players with tickets to the Super Bowl.

Rhodes was interviewed by WCBS 880 / RADIO.COM journalist Lynda Lopez about his experience with high school football coach Aaron Feis, who is credited with saving his life. “He treated his team like family. With me, you know, he was like a dad to me,” Rhodes told Lopez of Feis.

Feis, who passed away while protecting students from an active shooter, is the one who encouraged Rhodes to see a doctor when his performance on the field began to suffer.

Rhodes, who said he felt fine despite some headaches and fatigue, went to see a doctor, who diagnosed him with germinoma. After battling cancer for a few years, Rhodes is doing well and thinking back on how grateful he is for the football coach who saved his life.

“I’m living each day. I’m doing well in school. I’m trying to make sure I’m keeping up with the family. You know, of course I’m looking after my health, but even when I was in the hospital, you know, I put my family first,” Rhodes told Lopez of his current condition.

“But overall, I’m doing good, at least that’s what the doctors are telling me,” he continued. “My scans are coming back good, my blood’s coming back well. There’s some stuff I need to work on, but overall, I feel great. I mean, I feel like nothing can stop me now,” Rhodes said.

news
Meghan Markle reveals she had a miscarriage: 'I tried to imagine how we'd heal'
news
VIDEO: Mysterious monolith found in remote Utah desert
news
Will essential workers get earlier access to COVID vaccines?
music
Vote now for RADIO.COM Artist of the Year
music
Pete Davidson to star in revamped version of ‘It’s a Wonderful Life’
news
What does a safe classroom look like?