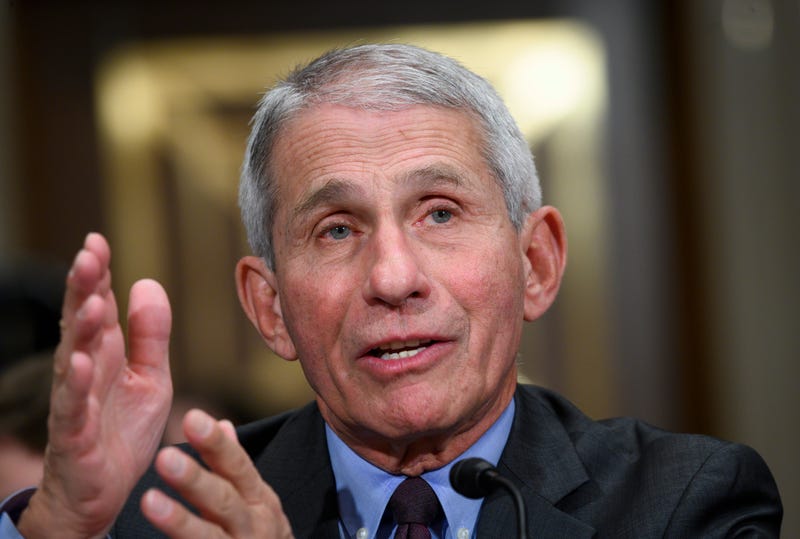 Speaking with 1010 WINS’ Donna Vaughan, Fauci encouraged families to gather in much smaller groups and wear masks this Thanksgiving, and he urged people to make a “risk benefit determination” like he does. That means taking into consideration whether some family members are at a higher risk of experiencing serious outcomes from the virus.

“One thing people need to understand is that when you’re in the home with people with whom you are familiar, you tend to let your guard down,” he said. “Many, many of the infections—up to half right now—are transmitted from an individual who has no symptoms.”

“So you may be in the household thinking that everything is alright, looks good, feels good, and then all of the sudden, a few weeks later, you find out that there was person inadvertently and innocently who was infected and spread the infection throughout the household,” Fauci said.

Noting that infections are “really intense” in the U.S. right now, Fauci said, “When you bring people into the home in larger and larger numbers, the risks get more and more.”

Fauci said there have been over 100,000 U.S. coronavirus infections daily for more than 20 days in a row and that “the risk is real.”

“You just have to be careful,” he said. “Because a bit of a sacrifice now may lead to many more healthy and happy Thanksgivings in the future.”

Amid his Thanksgiving warning, Fauci is also preparing to work with a new administration in the White House.

Asked if he’d been contacted by Joe Biden, Fauci said the president-elect hadn’t reached out to him directly but that Ron Klain, who has been tapped as Biden’s White House chief of staff, had contacted him.

“I have been in contact with him, just talking about touching bases as we move into a transition (between the Trump and Biden administrations),” Fauci said.

He said now that the transition had begun after weeks of delay, he expects he’ll continue in his role as director of NIAID.

Fauci also told 1010 WINS that he expects two of the three COVID vaccines—by drugmakers Pfizer, Moderna and AstraZeneca—to be approved by the FDA and distributed next month.

“When you get to the middle or end of December, it is very likely that at least two, I would say almost certainly two, of the vaccines that have been shown to be highly efficacious … the doses will be available,” Fauci said. “And the projection is about 40 million doses, which would mean 20 million people would be able to get vaccinated.”

Asked if New Yorkers should be concerned about the availability of a vaccine, Fauci said, “I hope not. We’re all hoping that there would be equitable distribution based on not only population, but the risks people have.”

Fauci said not everyone will have access to the vaccines at the same time. “That would be logistically impossible, as well as the fact that the doses are still being manufactured, so we don’t have enough,” he said.

Fauci said the Centers for Disease Control will determining the prioritization when a vaccine is authorized. He said it is likely that health care workers and the vulnerable, including elderly people and those with underlying health conditions, will be prioritized first.