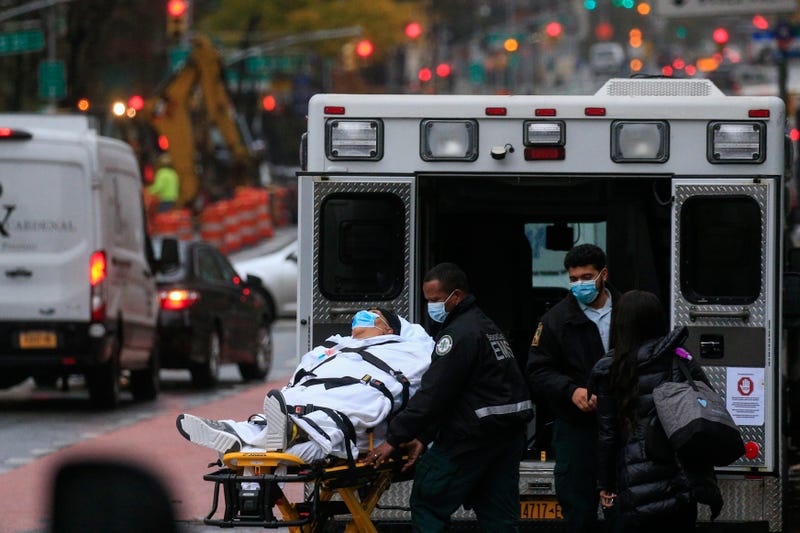 A patient is transported outside of Tisch Hospital in New York on November 13, 2020. Photo credit KENA BETANCUR/AFP via Getty Images
By 1010 WINS Newsroom

NEW YORK (1010 WINS) -- The U.S. reached several grim milestones on Friday: The number of Americans since Jan. 21 who contracted COVID-19 surpassed 13 million, and the number of current COVID-19 hospitalizations in the U.S. surpassed 90,000 for the first time since the beginning of the pandemic, according to Johns Hopkins University.

Another milestone: The number of people in intensive-care units on Thursday due to COVID-19 also rose to an all-time high of 17,802.

Another record: The exact figure of 90,481 hospitalizations is a record for the 17th day in a row, according to the COVID Tracking Project.

More than 1,200 deaths were reported in the U.S. for Thursday, pushing the nation’s total death toll to more than 264,624 deaths since Jan. 21, when Johns Hopkins recorded the first cases of COVID-19.

According to the school's data, 13,047,202 Americans contracted the potentially-deadly virus

The number of COVID-19 cases has grown exponentially. Below, illustrates that growth:

On Jan. 21, Johns Hopkins records its first case of COVID-19: