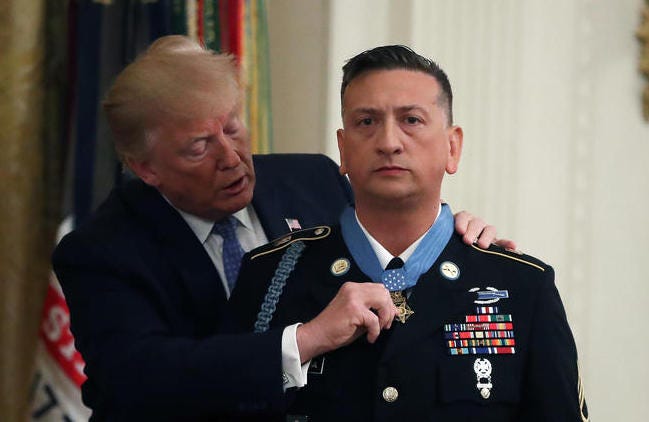 (Connecting Vets) - "Were it not for David Bellavia I would not be sitting here today. We couldn't get out. Couldn't do anything. We were stuck there. I asked David to help me out and he did that. He put himself in line of that fire and laid down a base of fire, overwhelmed the enemy long enough for me to get myself and the members of my squad out of there," said retired Sgt. 1st Class Colin O. Fitts.

Bellavia, a squad leader switched an M16 rifle for an M249 Squad Automatic Weapon, entered the house where his squad was trapped and provided cover fire so he and his fellow soldiers could exit safely. He then re-entered the house and took on insurgents firing rocket-propelled grenades -- armed this time with an M16.

On Tuesday, Bellavia became the first living veteran of Operation Iraqui Freedom to be awarded the Medal of Honor. President Donald Trump presented the award for conspicuous gallantry on June 25. 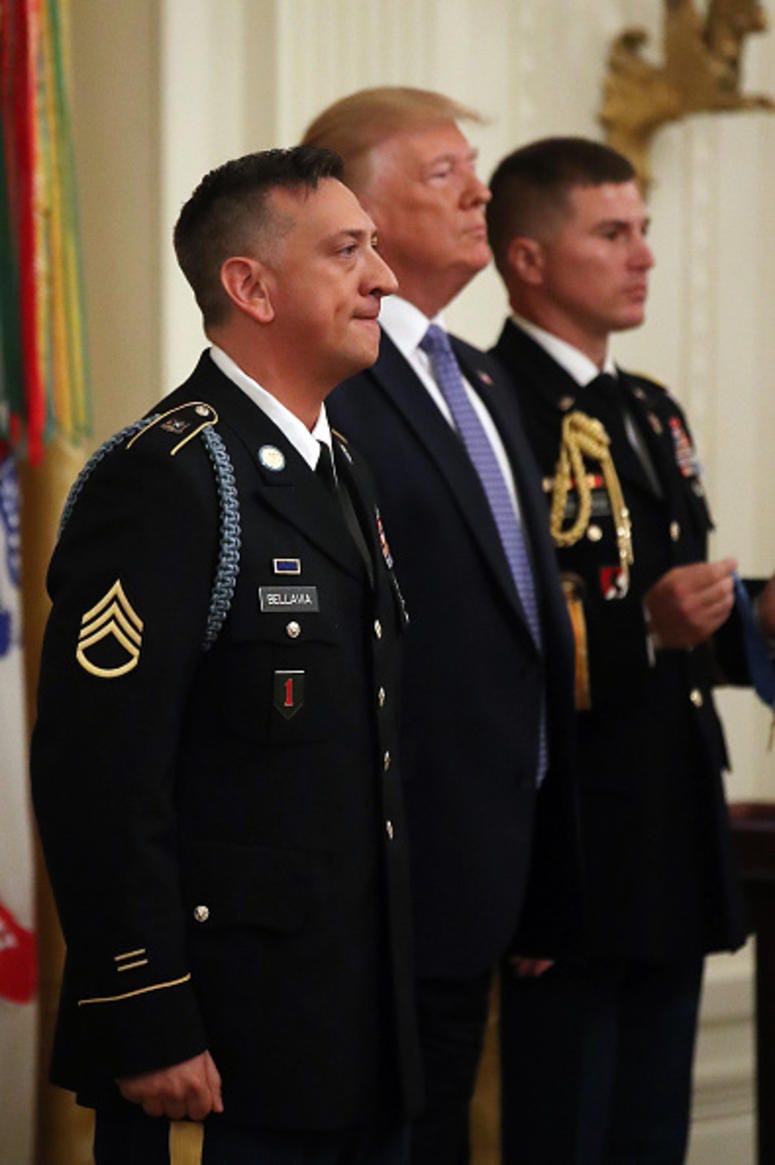 To loud applause and cheers, the president placed the medal around Bellavia's neck in the East Room of the White House, in front of his wife, three children, mother, brothers, and 32 of the service members who were with him in Iraq, including 12 soldiers who were there with him that dangerous November night.

The president commended Bellavia for his bravery, "saving his soldiers and facing down the enemies of civilization."

"David exemplifies the same warrior ethos that gave his grandfather and all the Normandy soldiers the strength to defeat evil," Trump said. "America is blessed with the heroes and great people like Staff Sgt. Bellavia. Today we honor you for your extraordinary courage and salute your selfless service."

"David Bellavia had to go back into a darkened, nightmare of a house where he knew there were at least 5 or 6 suicidal jihadists waiting. I was there when he made that decision -- took it upon himself. I watched him summon whatever emotion it was that drove him to go back in there," said Ware.

Bellavia often brought up the sacrifice of others -- the commander who would be killed two days later, the other men and women who wouldn't make it home -- rather than discuss his own.

The wife and son of one of the soldiers his brigade lost, Captain Sean Sims, attended Tuesday's Medal of Honor ceremony. Attendees that it's apparent, are just as important to Bellavia as his own family.

And it seems that much of Bellavia's reaction and approach to becoming the only living Iraq War Medal of Honor recipient is similarly selfless. Bellavia stressed the importance of recognizing the service and sacrifice of others -- especially that of the soldiers who didn't come home.

"The Army gave me purpose and direction. The Army gave me meaning. I'm forever grateful to the United States Army. I want to be of service to my Army. I want to bring as many young men and women to join the military as possible," Bellavia said. "There are a million and five reasons why we're divided in this country. I never cared what your skin color was, who you worshiped or who you loved -- if you were willing to get shot at for me, for my buddies, I will follow you, I will lead you anywhere."