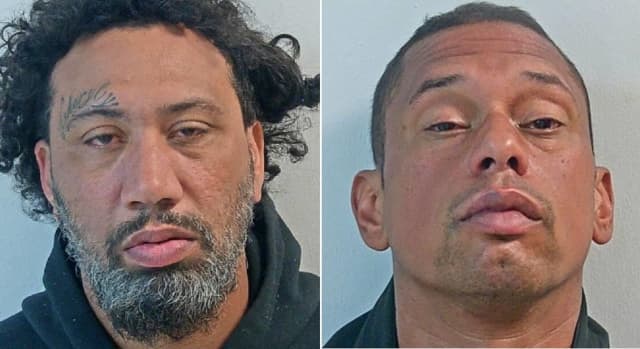 CLIFTON, N.J. (1010 WINS) -- New Jersey police officers rescued a woman and man who’d been kidnapped after the woman mouthed “Help me!” to a stranger in a bank parking lot.

The 28-year-old woman and 32-year-old man were in a parked car near Main and Vreeland avenues in Clifton on Friday night when Travis Mann, 39, allegedly tapped on their window pretending to be a police officer, Clifton Police Lieutenant Robert Bracken told the South Passaic Daily Voice.

Mann told the two they had broken a law by “being intimate in a public place,” said he had a weapon and told them he would arrest them if they didn’t fork over cash, the outlet reported.

The ex-convict then forced the two to drive him to a Chase Bank on Main Avenue, according to the outlet. His accomplice Paul Dunlop, 45, reportedly trailed behind them in another car.

As the woman went into the ATM vestibule to withdraw cash, she mouthed, “Help me!” to a passerby, according to the outlet.

The passerby called police, and both Mann and Dunlop were arrested, the outlet reported. Attorney information for the two men wasn’t immediately available Tuesday.