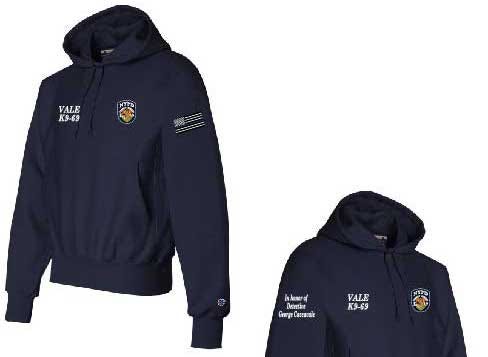 PELHAM, N.Y. (1010 WINS) -- A Westchester mom is outraged after school officials banned a sweatshirt with a “thin blue line” patch that honors police, including her father, an NYPD officer who was killed in 1976.

Carla Caccavale, of Pelham, had the sweatshirts made after learning a police dog was being named after her father, Transit Police Detective George Caccavale, who was shot and killed by three men in Long Island City when Carla was just a newborn.

Demand for the sweatshirts was high and Pelham school officials were among the buyers, according to the Daily News.

However, in an email last month, superintendent Cheryl Champ said staffers were banned from wearing the thin blue line patch, adding in a second email this month that the flag could be “perceived by students to be threatening in nature, causing them to feel unsafe within our schools.”

The email outraged the president of the NYPD’s detectives union, who sent a letter to Champ in which he called the ban an “obscenity.”

Champ sent another email Thursday, acknowledging “decisions made last week did not evenly support our ideals of political neutrality.” She said staffers should avoid any political clothing and added that the ban doesn’t apply to students.

Back again! The sweatshirt orders continue to multiply. One of the great parts about it is we get to see Vale’s best...

In a statement Friday, the school district said the ban was “specifically about disallowing staff attire displaying symbols considered to have political meaning, including, but not limited to the blue line flag.”

Caccavale told the Daily News that the sweatshirt was not politically motivated and that “This is not Black Lives Matter versus police. This was never the intent when we created the sweatshirt.”

“The issue is still that a blue line flag is not political,” she said. “It just isn’t. It’s too late. This was never about politics. It was about honoring my father."

Caccavale said her two sons have worn the sweatshirt to school but that her two daughters haven’t. “They are very afraid what’s going to happen,” she said.