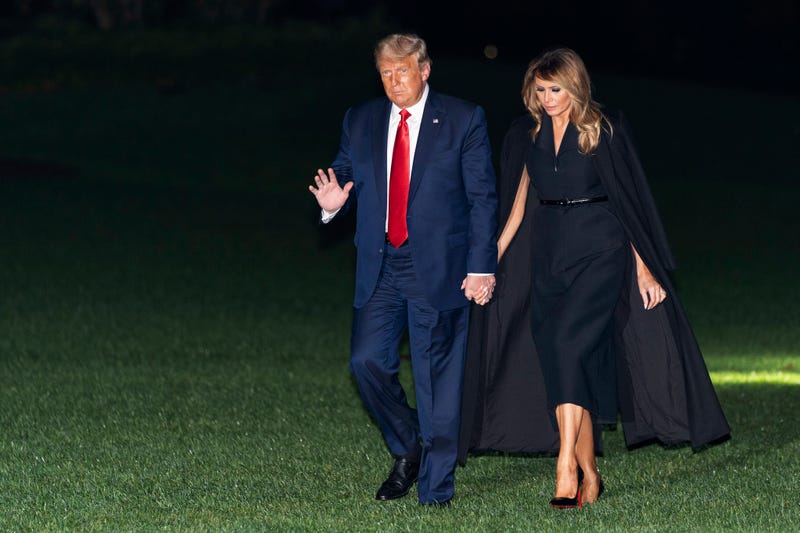 WASHINGTON (AP) — The Latest on the presidential campaign (all times local):

President Donald Trump is taking his own advice and plans to vote in person in the presidential election on Saturday in Florida.

Trump is heading to his home state Friday for campaign rallies at The Villages and in Pensacola. He’s scheduled to spend the night at his Mar-a-Lago estate in Palm Beach and says he’ll vote on Saturday before he flies north for more campaign rallies.

Trump revealed his plans on Thursday after the presidential debate with Democrat Joe Biden.

Earlier this year, as Trump pressed unfounded claims about fraud surrounding mail-in and absentee ballots, Trump said people should be required to show up in person at the polls to vote.

Trump also has voted by absentee ballot in the past.

Democrat Joe Biden says his pledge to gradually move the country away from fossil fuels to combat climate change doesn't mean he will impose bans that could effectively shut down the oil and gas industry.

President Donald Trump’s reelection campaign has seized on Biden’s comments in the closing moments of Thursday night's debate in Nashville. That’s when the former vice president said, “We need other industries to transition to get to ultimately a complete zero emissions by 2025.”

Boarding his plane to fly back to his home in Delaware, Biden responded, “Eventually we’re going to have to go to all. But we’re not going to ban fossil fuels.”

In a call with reporters Thursday night, deputy campaign manager Kate Bedingfield clarified that Biden was talking about eliminating oil subsidies when he said he would “transition away from the oil industry."

HERE’S WHAT YOU NEED TO KNOW ABOUT THE PRESIDENTIAL RACE:

President Donald Trump and his Democratic challenger, Joe Biden, are meeting for their final debate Thursday night in Nashville, Tennessee.

The second and final debate between President Donald Trump and Democratic nominee Joe Biden has ended, with a remarkably different tone than their first meeting.

Trump and Biden debated for just over 90 minutes at Belmont University in Nashville, Tennessee, on Thursday night. The faceoff included substantive debate on a number of topics including the response to the coronavirus pandemic, immigration and how each would handle climate change as president.

The nominees’ first debate was so raucous that changes were enacted to make the next one more orderly. Those modifications included a mute button controlled by a representative of the Commission on Presidential Debates, to ensure that each candidate would have two full minutes uninterrupted for opening answers on each topic.

Fox News’ Chris Wallace, who moderated that first meeting, said, “First of all, I’m jealous,” when asked on-air Thursday night what he thought of the tenor of the second debate moderated by NBC News’ Kristen Welker.

To close out Thursday night’s presidential debate, both President Donald Trump and Joe Biden offered very divergent versions of what they’d tell Americans who didn’t support them on a hypothetical Inauguration Day.

Trump that if he’s reelected, during his inaugural address, he would tell voters who didn’t back him in the election that “success is going to bring us together, we are on the road to success.” He touted the country’s economic growth “prior to the plague coming in from China” that sparked the coronavirus pandemic.

Biden, meanwhile, says he would tell his detractors that “I represent all of you, whether you voted for or against me” and “I’m going to make sure that you’re represented.” He went on to reiterate some of his major campaign themes, pledging to grow the economy, address systemic racism, move the nation towards clean energy and make sure every American has “an even chance.”

Democrat Joe Biden and President Donald Trump are sparring over the nation’s reliance on oil -- and what needs to be done to reduce future emissions.

During the presidential debate Thursday, Biden said the U.S. needs to embrace clean energy and eventually transition away from the use of oil.

Trump quickly pounced, cutting in, “That’s a big statement,” and wondered aloud if voters in oil-producing states like Texas, Oklahoma and Pennsylvania were listening.

Biden said that his plan was far more nuanced than Trump was making it sound and emphasized that the transition would be gradual. He also criticized Trump for subsidizing the oil industry while failing to give similar benefit to clean energy producers, like wind power and solar.

President Donald Trump is attacking his Democratic challenger, Joe Biden, over his support for a 1994 crime bill, part of a furious, larger back-and-forth over racism.

Trump said the legislation “did such harm to the Black community.”

Biden has called the law a mistake in the past, and he reiterated that Thursday. Biden said, “The fact of the matter is, there is institutional racism in America.”

The discussion over race in the country then stretched on for several minutes, with Biden sarcastically seizing on Trump’s fondness for saying he’s done more for African Americans than any president since Abraham Lincoln by referring to Trump as “Abraham Lincoln over here.”

Trump said that Biden had four years as vice president to combat racism but failed to do so.

Trump says, “You’re all talk and no action, Joe.”

Biden said Trump was race baiting, saying that the president “has a dog whistle about as big as a foghorn.”

Democrat Joe Biden is framing the election as a battle over the character of the nation, a reiteration of one of his major campaign themes.

Speaking directly to the audience during Thursday night’s debate, Biden told them they’re familiar with both his and President Donald Trump’s character, their “reputations for honor” and “reputations for telling the truth.” He went on to declare that “our character is on the ballot.”

His comments came in response to Trump’s declaration that he ran because Biden and President Barack Obama “did a poor job.”

Trump responded that if his unfounded charges that Biden has received money from Russia and Ukraine are true, Biden himself is a “corrupt politician,” while Biden said the evidence for such allegations is a “Russian plant.”

Trump immediately dismissed Biden’s charges, declaring, “You have to be kidding me. Here we go again with Russia.”

Joe Biden and Donald Trump are clashing on race relations, as the former vice president calls the current president “one of the most racist presidents we’ve had in modern history.”

Biden said Trump “pours fuel on every racist fire” and noted that at his last debate the president wouldn’t condemn white supremacy and told an extremist group to “stand down and stand by.”

Trump portrayed himself as a champion of Black people. Repeating his standard line that no president has done more for Black Americans than anyone other than Abraham Lincoln, Trump accused Biden and former President Barack Obama of ignoring issues of racial justice.

Trump told Biden: “You’ve done nothing but the crime bill which put tens of thousands of Black men in jail.”

Biden said he’s been trying to change drug sentencing laws that disproportionately harmed African Americans and that the public knows his record.

Trump, touting criminal justice reform and opportunity zone bills he signed, said: “I am the least racist person in this room.”

President Donald Trump is defending his administration’s separation of immigrant children who remain away from their families following detentions along the U.S.-Mexico border.

Trump said during Thursday’s debate that children are often brought across the border not by families but “by coyotes and lots of bad people.”

The American Civil Liberties Union told a judge this week that there were still 545 children separated from their parents from 2018.

Trump said his administration had constructed more than 400 miles of his promised border barrier. He also said, “They built cages,” referring to Obama-era facilities depicted in media reports during the separations.

Joe Biden disputed Trump’s answer, saying kids “were ripped from” their families in 2018.

As he has done since the primary campaign, Biden defended the Obama administration’s immigration policy, admitting that it “took too long to get it right.”

Former Vice President Joe Biden says he would push for a $15-per-hour minimum wage and rejects the idea that it would hurt small businesses.

Biden said at Thursday’s debate: “There is no evidence that when you raise the minimum wage, businesses go out of business.”

President Donald Trump argued that the minimum wage should be left as an issue for the states to determine. He says, “How are you helping your small businesses when you’re forcing wages? What’s going to happen, and what’s been proven to happen, is when you do that, these small businesses fire many of their employees.”

The two candidates were asked about where they stand on raising the federal minimum wage as part of their final debate Thursday night. The minimum wage is now $7.25 an hour. Proponents of increasing it say the minimum wage has not kept up with inflation, making it harder for workers to make ends meet.

President Donald Trump and his Democratic challenger, Joe Biden, are blaming each other and each other’s political parties for the failure to provide a new round of coronavirus aid relief.

The Republican president suggested Pelosi doesn’t want to do anything that would help him.

Biden asked Trump why he isn’t talking to his “Republican friends” about a deal.

Mitch McConnell, the Senate’s Republican leader, has told his fellow Republicans that he warned the White House against striking a trillion-dollar relief deal with Pelosi before the Nov. 3 election.

Biden raised his voice as he reminded viewers of Thursday’s presidential debate that the Democratic-controlled House passed a relief bill months ago. It was ignored by the GOP-led Senate.

President Donald Trump is offering rare praise to a member of the media: the moderator of the final presidential debate.

Trump told moderator Kristen Welker on Thursday evening: “So far I respect very much the way you are handling this, I have to say.”

The praise for Welker comes after Trump attacked her on Twitter over the weekend.

She has “always been terrible and unfair, just like most of the Fake News reporters,” he tweeted at the time.

Trump has repeatedly fought with, belittled or denigrated members of the media during his tenure in office.

That included CBS New correspondent Lesley Stahl, with whom the president bickered repeatedly during an interview for “60 Minutes,” which he abruptly cut off.

Trump complained that the interview was unfair and released footage of it earlier Thursday.