IN DEPTH PODCAST: What's next for embattled Gov. Cuomo
By The Associated Press and 1010 WINS Newsroom

WASHINGTON (AP) — Moving from house to house is challenging under the best of circumstances, and even with movers as first rate as the housekeepers and other staff who work in the White House. 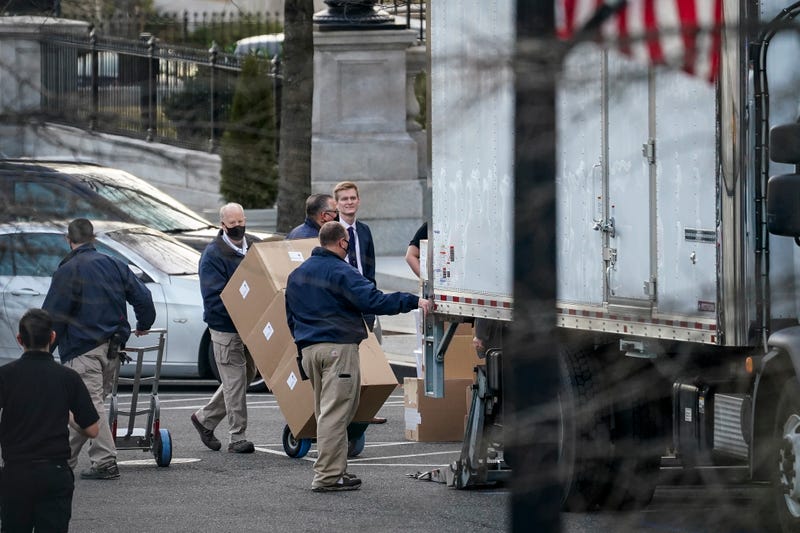 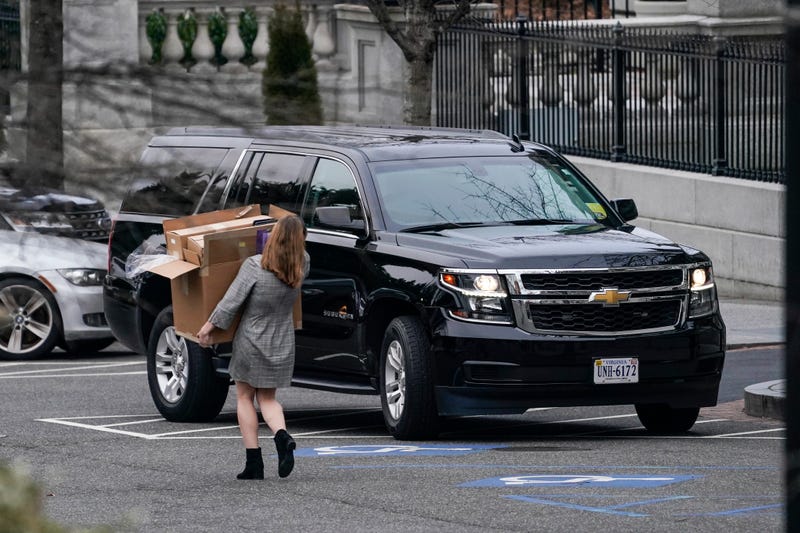 A woman carries boxes out of the West Wing of the White House on January 15, 2021 in Washington, DC. According to recent news reports, President Donald Trump is slated to leave Washington the morning of Jan. 20th, hours before President-elect Joe Biden will be sworn-in as president. Photo credit Drew Angerer/Getty Images 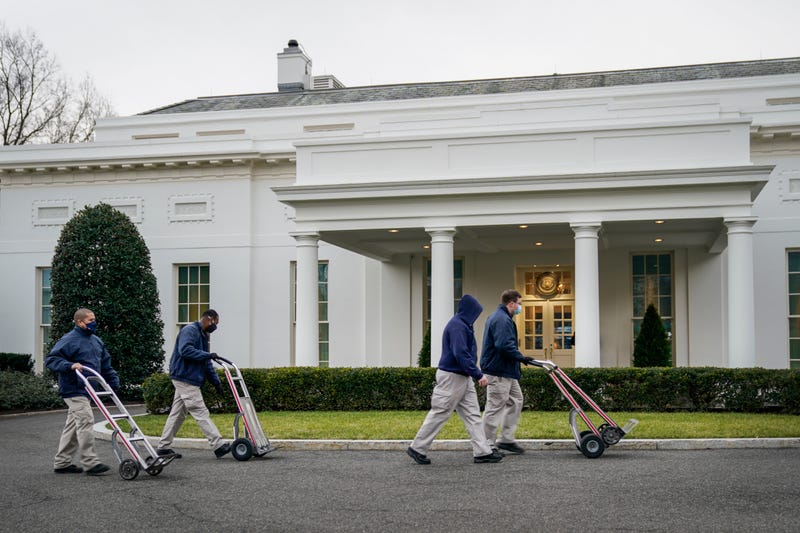 Workers roll dollies past the West Wing of the White House on January 15, 2021 in Washington, DC. According to recent news reports, President Donald Trump is slated to leave Washington the morning of Jan. 20th, hours before President-elect Joe Biden will be sworn-in as president. Photo credit Drew Angerer/Getty Images 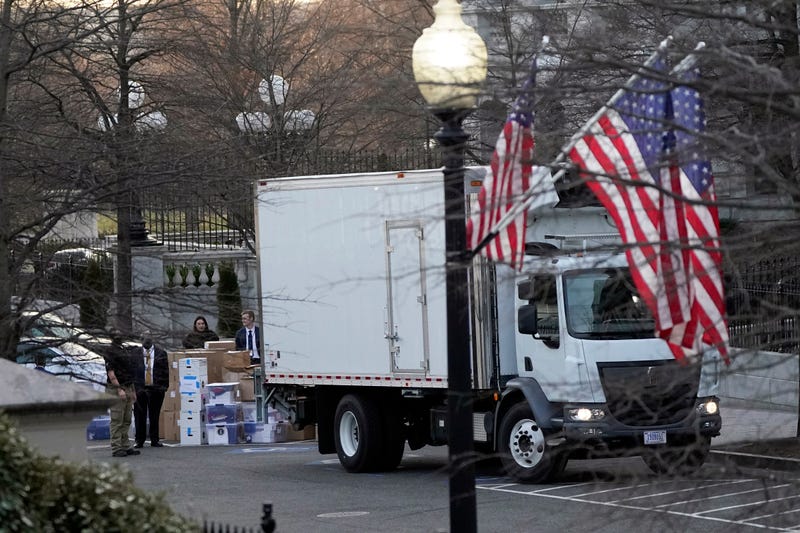 A van arrives to pick up boxes that were moved out of the Eisenhower Executive Office building, inside the White House complex, Thursday, Jan. 14, 2021, in Washington. Inauguration Day is also moving day at the White House. Photo credit AP Photo/Gerald Herbert 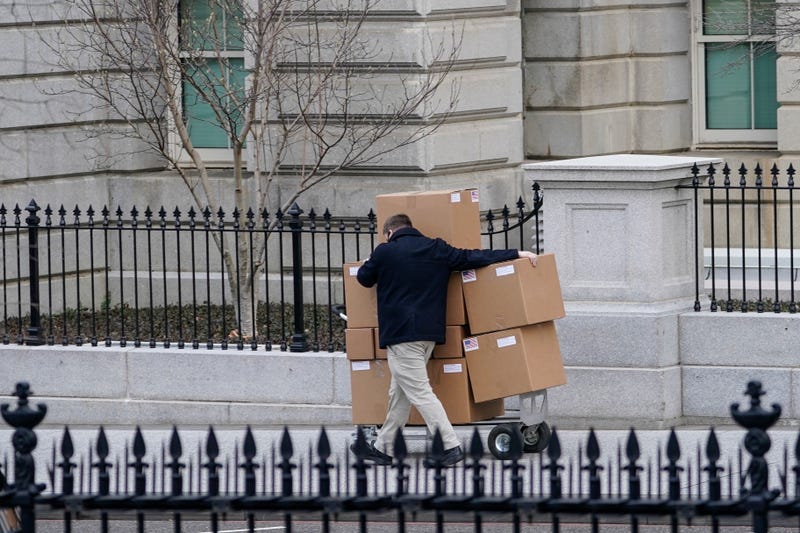 A man pushes a large cart full of boxes along West Executive Avenue between the West Wing of the White House and the Eisenhower Executive Office Building on January 15, 2021 in Washington, DC. According to recent news reports, President Donald Trump is slated to leave Washington the morning of Jan. 20th, hours before President-elect Joe Biden will be sworn-in as president. Photo credit Drew Angerer/Getty Images

But the coronavirus pandemic could be a complicating factor as the executive mansion gets ready for a new president and executes the Inauguration Day ritual of moving out one leader and settling in another.

It's typically a precision operation: Both moves are usually carried out in about five hours. The clock would normally start ticking when the outgoing and incoming presidents leave the White House together to head to the Capitol for the swearing-in ceremony. The process would continue during the ceremony and the parade down Pennsylvania Avenue to the White House.

Biden's wife, Jill, said Friday that she and the president-elect had spent the past two months preparing to move from their home in Wilmington, Delaware, and that they were “packing up our closets this morning.”

But things will unfold a bit differently this year.

President Donald Trump, still angry over losing reelection, is skipping the inauguration. He's also leaving town before Biden takes the oath of office, meaning the pair will not be going to the Capitol together. Depending on when Trump heads out, housekeepers and other residence staffers who help move the presidents' belongings could get a welcome head start on the packing and unpacking.

Inauguration planners have scaled back the traditional roster of events this year because of the pandemic, which is now responsible for nearly 400,000 U.S. deaths. A luncheon for the new president at the Capitol has been scrapped, and the hourslong parade down Pennsylvania Avenue to the White House will be virtual.

That combination of events in the past has kept the new president and first lady out of the White House long enough for the household staff to finish moving in their clothing, furnishings and other personal items.

The pandemic could affect the moving process in other ways.

Some public health experts have said it's important that the White House take extra precautions to reduce the spread of the largely airborne disease during the busy move.

The White House was the scene of several coronavirus outbreaks that infected dozens of staffers and others, including Trump and his wife, Melania. Biden is at risk because of his age. The 78-year-old is tested regularly for the coronavirus and recently received his final dose of the vaccine.

Linsey Marr, an engineering professor at Virginia Tech with expertise in the airborne transmission of viruses such as the coronavirus, said housekeepers and other staff should make sure to wear face coverings because they will be exerting themselves during the five to six hours it typically takes to wrap up the move.

Marr also suggested that the Bidens wait a few hours after the move is completed to go into the residence.

The White House normally is thoroughly cleaned in between families, said Anita McBride, who as an assistant to President George W. Bush helped coordinate his move out of the mansion in 2009.

“Everything goes through a massive cleaning," she said. Beds are stripped, mattresses replaced, rugs cleaned or replaced and fresh coats of paint applied, as needed.

The White House chief usher, who oversees the housekeeping staff, typically coordinates with someone on the incoming president's team to learn about their preferences so the residence can be made to feel as much like home as possible, with clothes hanging in the closets and favorite foods in the kitchen.

Once the waiting moving trucks are waved through tight security and onto the White House grounds, residence staff members break into groups to carry out specific assignments. Some will handle only Trump's belongings while others will be tasked with putting the contents of Biden's boxes in their designated places.

The chief usher reports to Melania Trump, who toured the White House living quarters in November 2016 when she accompanied Donald Trump to the White House for a post-election meeting with then-President Barack Obama. President Trump has broken with tradition and has not invited the Bidens to a similar meeting.