Though he may be best known on a national stage for being controversially pulled from Game 6 of the 2020 World Series by manager Kevin Cash, Tampa Bay Rays' lefty Blake Snell is one of the sport's elite arms.

Having said that, the ears of quite a few executives around the sport perked up last week when MLB.com's Mark Feinsand reported that while the Rays "aren't actively shopping Snell," general manager Erik Neander has "told other clubs that they’re open to the idea of trading" the former All-Star.

Snell is an extremely attractive trade target based simply on his production. The southpaw won the 2018 American League Cy Young Award, and has posted a 3.24 ERA and 3.50 FIP in 108 career starts.

That's not where the list of attractive qualities Snell presents stops, though. He'll celebrate just his 28th birthday this weekend, and is signed to an extremely team-friendly contract that will pay him $39 million over the next three seasons.

Of course, Snell's youth and contractual status almost certainly mean that the Rays will need a pretty impressive package of prospects to part ways. After all, the team won the American League pennant this past season, so it's not as though they are in a position where they're desperate to trade star players.

Still, it's hardly a mistake that the Rays' willingness to discuss a trade of Snell has made its way to the public. With that in mind, here are five potential suitors for Snell: 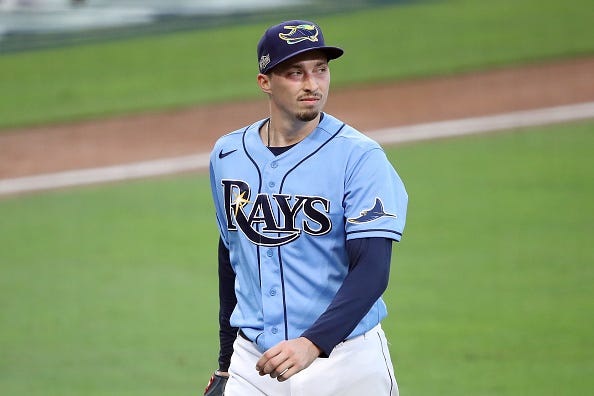 Blake Snell could be a fit for the Angels. Photo credit (Sean M. Haffey/Getty Images)

With Mike Trout and Anthony Rendon at the forefront of their lineup, the Angels have an offense that's ready to compete for a World Series right now. The starting rotation, however, is lightyears behind. Los Angeles native Trevor Bauer would be a perfect fit in free agency, though he'll have other suitors and his addition alone probably wouldn't be enough to guarantee that the Angels return to the postseason for the first time since 2014. MLB.com's Mark Feinsand has reported the the Angels are among the potential suitors for Snell, and from here, they are the perfect fit, whether it's in addition to Bauer or as a pivot if he signs elsewhere. The Angels have the No. 21 farm system in baseball per MLB Pipeline, so it's hard to imagine them completing a deal for Snell without including outfielder Brandon Marsh and/or (probably and) lefty Reid Detmers if outfielder Jo Adell is off the table. We'll see if new general manager Perry Minasian has the ammo to get a deal like this done, but presumably his No. 1 goal is to avoid wasting all of Trout's prime. 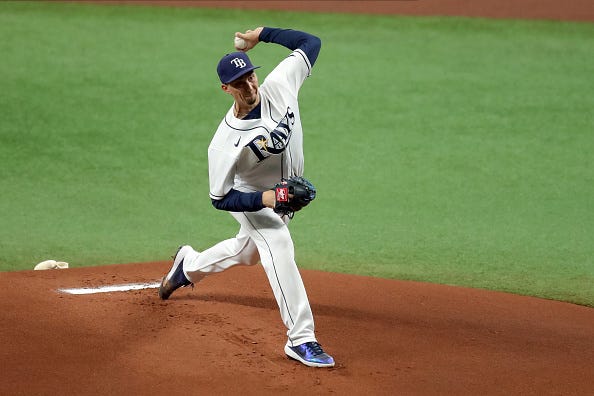 Blake Snell may have pitched his last game with the Rays. Photo credit (Mike Carlson/Getty Images)

At first glance, the Mariners may seem like a bit of a curious fit, but the deeper you dig, the more intriguing they become. Snell is from Seattle, and not only does Feinsand call the Mariners Snell's "preferred destination," but he says Jerry DiPoto and the organization are indeed interested in the lefty. The Mariners went 27-33 with a -49 run differential in 2020, but they have some young pieces on their major league roster - Kyle Lewis, J.P. Crawford and Justus Sheffield - that are already contributing at a solid level. The Mariners' system is also flush with young talent - MLB Pipeline called it the fourth-best in baseball - meaning that more players are on the way to the major league level and that the Mariners could put together a compelling package for the Rays. Outfielders Jarred Kelenic and Julio Y. Rodriguez are probably off the board, and the same may be true for 2020 first-round pick Emerson Hancock. Perhaps some of the secondary pieces in such a deep system - righties George Kirby and Logan Gilbert, along with outfielder Taylor Trammell - could be part of a trade package. It would be a gamble for a team that wouldn't be ready to contend in 2021 even with Snell, but he would make for a pretty good trio at the top of the rotation with Sheffield and Marco Gonzalez. 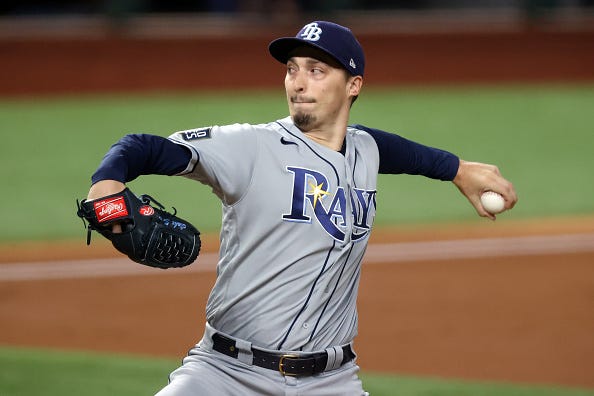 In November, RADIO.COM MLB Insider Jon Heyman said that there were "whispers" that the Giants could ultimately land Trevor Bauer in free agency. If that doesn't ultimately happen, the Giants would be an interesting suitor for Snell. Gabe Kapler's team probably overachieved by going 29-31 in 2020, and president of baseball operations Farhan Zaidi has quite a bit of work to attempt to level the playing field with the Los Angeles Dodgers and San Diego Padres. Adding Snell at the top of a rotation that also includes Kevin Gausman could improve the Giants' chances of grabbing a National League Wild Card spot in 2021. Still, Snell is under contract for three more seasons, and the Giants would be trading for him with the more realistic goal of competing in 2022 and 2023. Gausman, Johnny Cueto, Buster Posey and Brandon Belt will all come off the books after next season, meaning acquiring Snell could be the first of a flurry of moves that the Giants make over the next 24 months. Catcher Joey Bart isn't going anywhere, and it seems unlikely shortstop Marco Luciano would be available either. However, for a chance to acquire an in-prime pitcher in a team-friendly deal, perhaps the Giants would be willing to part ways with outfielders Heliot Ramos and Hunter Bishop, their No. 3 and 4 prospects. 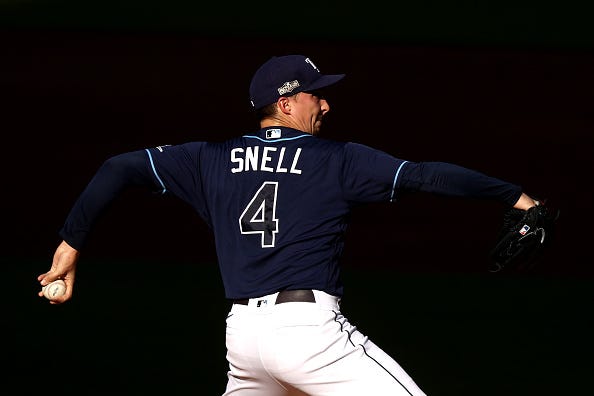 Tony La Russa's White Sox have one of the most exciting young lineups in the sport, one that some believe could add more firepower with the addition of a free-agent outfielder like George Springer. The team's most pressing need, however, may need to be another front-line starter. Dallas Keuchel was tremendous in his first season with the White Sox - he posted a 1.99 ERA - although that likely wouldn't be sustained over the course of a full season. Lucas Giolito is one of the best young arms in the sport, but adding Snell in between Giolito and Kuechel would make the White Sox a legitimate World Series contender. Kuechel could even end up being the No. 4 starter if Michael Kopech turns out to be as good as most believe he will be. Despite all the talent that the White Sox have graduated in recent years, they are the sixth-ranked farm system in baseball. Second baseman Nick Madrigal could be an interesting trade chip from the major league roster, while righties Dane Dunning, Jared Kelley, Jonathan Stiever and Matthew Thompson could be interesting pieces from the minor league system that White Sox general manager Rick Hahn could be convinced to part with. 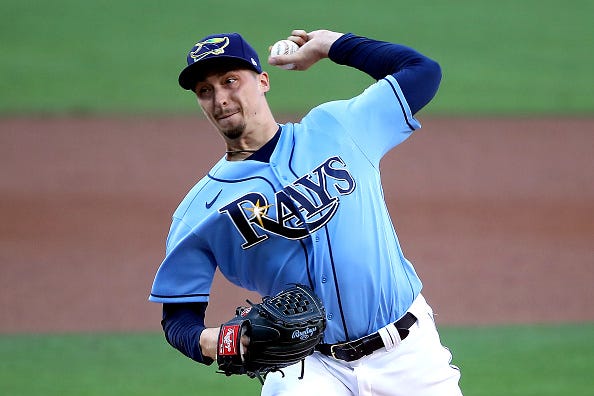 The Mets are at the bottom of this list because over the weekend team president Sandy Alderson suggested that the Mets were more likely to make major moves in free agency than on the trade market. However, Snell is a different type of opportunity than Francisco Lindor or Nolan Arenado, who can become free agents next offseason. Snell is on a very team-friendly deal, and can't become a free agent until after 2023, so he may be someone you're willing to part with young talent to acquire. If the Mets sign George Springer, perhaps they'd be willing to include Brandon Nimmo, under control through 2022, in a deal. The Mets also have a surplus of capable young shortstops, with Amed Rosario, Andres Gimenez and Ronny Mauricio, any of whom could be part of a return package as well. The Mets aren't the most likely landing spot for Snell, but if they added him to a rotation that is expected to include Jacob deGrom, Marcus Stroman and Noah Syndergaard, it would make them a legitimate threat to win a crowded National League East.