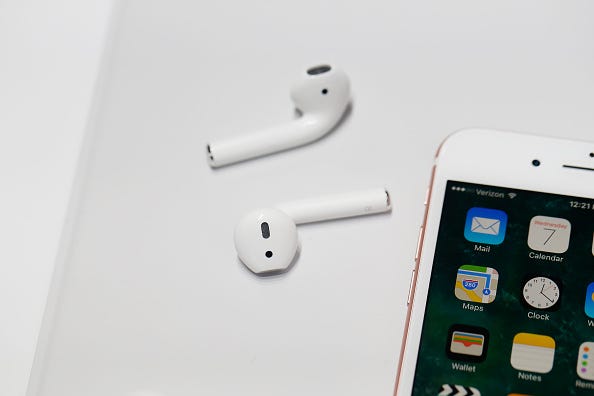 When Santa gifted one second-grader AirPods for Christmas, he never imagined this outcome.

One boy went through a life-changing experience over Christmas break when he accidentally swallowed one of the AirPod headphones he got as a Christmas gift.

“I can’t make this up,” the mother, Kiara Stroud, wrote on a Facebook post that included an X-ray image of her son’s stomach.

I can’t make this up. My child, my child. Thanks for all of the prayers. We’re home. No more airpods for this kid 🤦🏾‍♀️

Stroud told local ABC affiliate WSB-TV that the boy was holding the device in his mouth by the longer side when the incident occurred.

After receiving a call from her mother that the 7-year-old boy was “choking on an AirPod,” she rushed him to the Children's Healthcare of Atlanta Egelston hospital.

Doctors took an X-Ray that revealed the AirPod was lodged under the boy’s rib cage.

"He was very nervous. He's like, well, he thought he was gonna be in trouble. So, you know, we just kind of assured him that it's ok," Stroud told WGXA.

“Everything is fine. In a few days, it’ll pass through,” Stroud told the station adding that doctors decided the best course of action is to allow the AirPod to pass on its own.

Since the incident, she revealed that her son doesn’t want his phone near him out of fear that it’ll connect to the AirPod in his stomach and play some tunes.

She also admitted she’ll likely wait until her son is a little older to invest in electronic gadgets or will invest in old fashioned headsets that aren’t wireless.

“That's what I would suggest. Because anything could happen," Stroud said hoping her experience serves as a cautionary tale to other parents.