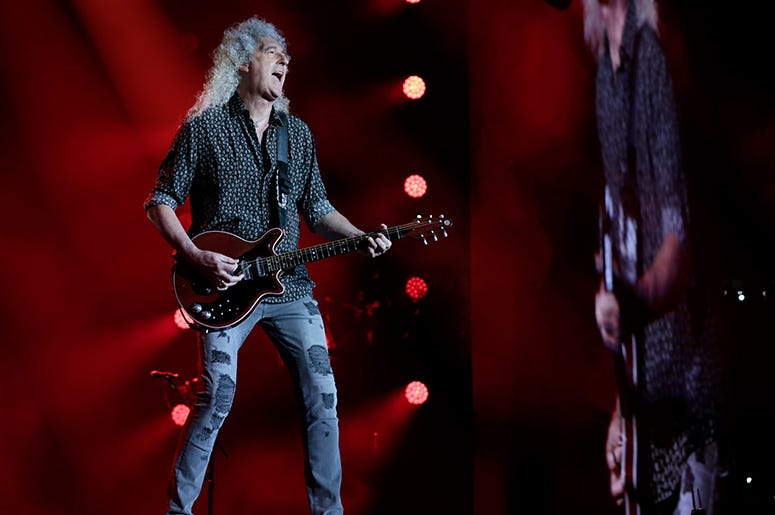 Brian May revealed just how dire his health condition was last May, telling Good Morning Britain he is “grateful to be alive” after surviving a heart attack and serious stomach hemorrhage.

The Queen guitarist shared how complicated his diagnosis became when doctors tried to save two internal organs at once.“You have to be so careful with the medication that they give you, because it’s great for the stents, it’s great for the heart,” he told the show.

“…but it’s not very good for the rest of your body and you can really go down."

May was rushed to the hospital after suffering a heart attack five months ago. The artist decided against surgically repairing three congested arteries and opted for treatment through medicine. The medication had an adverse reaction and essentially caused his stomach to explode. "That was the point where I nearly lost my life, not the heart attack, strangely enough."

“The worst thing that happened was the stomach hemorrhage, and I lost an awful lot of blood all at one time and just was wiped out,” he told the hosts. “I couldn’t move, I couldn’t get across the floor.”

WATCH MORE: Brian May Opens Up About Depression Battle

Doctors then advised Brian to have stents placed inside his chest to avoid future complications. “I had a wonderful, wonderful surgeon, and I’m so grateful to be alive," he said. "I had three stents in me, which are working just fine, and I feel good.”

As the COVID-19 pandemic continues to slog through normal life, Queen decided to treat fans to their first live album, Live Around The World. The project was inspired by their YouTube Watch Party back in June after the postponement of their Rhapsody tour due to COVID-19 restrictions, which featured highlights from previous concerts around the globe.