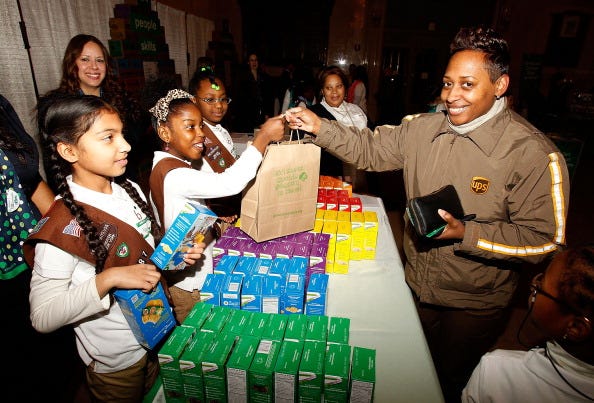 The Girl Scouts of America have a message for parents this holiday season: don’t make daughters show affection to family members if they don’t want to.

The organization shared the reminder on Twitter writing “Forced affection = Not O.K” alongside a link to their article titled, “Reminder: She Doesn't Owe Anyone a Hug. Not even at the Holidays.”

The organization says that forcing a young girl to hug a relative may have unintended consequences later in life.

Unless showing affection is voluntary, they say it can be confusing to young girls, and make them question consent and whether or not they “owe” someone physical affection in the future.

The article encourages parents to “reconsider” statements such as "Uncle just got here - go give him a big hug!" or "Auntie gave you that nice toy, go give her a kiss,” and instead, give children the space to decide how they’d like to show affection.

According to the article, establishing boundaries doesn't entail being rude.

A hug or a kiss can be swapped for various forms of affection including a smile, a high five, or an air kiss. If a child naturally gravitates towards hugs and kisses to their loved ones then it’s okay because it’s their decision, they claim.

“It’s important that she knows she gets to choose which feels most comfortable to her," the organization said.

“The notion of consent may seem very grown-up and like something that doesn’t pertain to children. But the lessons girls learn when they’re young about setting physical boundaries and expecting them to be respected last a lifetime, and can influence how she feels about herself and her body as she gets older,” Girl Scouts’ developmental psychologist Dr Andrea Bastiani Archibald said.

"Plus, sadly, we know that some adults prey on children, and teaching your daughter about consent early on can help her understand her rights, know when lines are being crossed, and when to go to you for help," Bastiani added.