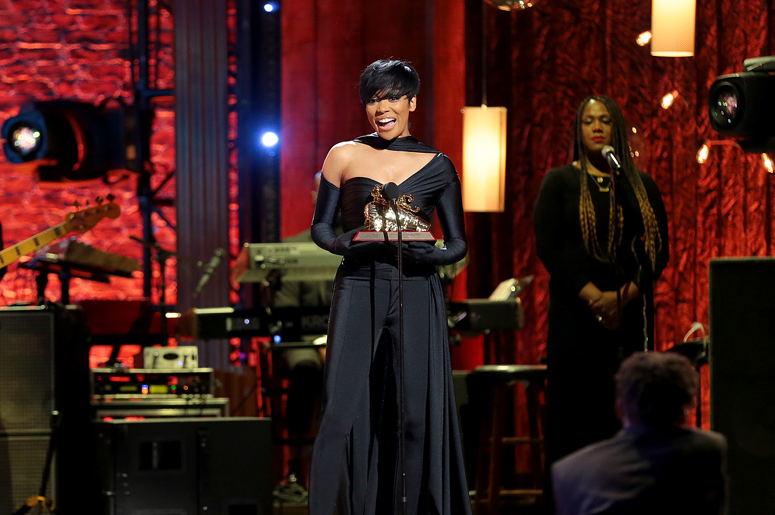 The “Queen of the South” aka Monica caught up with Kenny Burns from Atlanta’s V-103 and RADIO.COM on Monday to discuss all the epic moments that have her “still smiling,” from the previous night’s Soul Train Awards.

One of the first epic moments up for discussion was Monica look for the evenings festivities. Inspired by the “trip down memory lane with Soul Train,” Monica said she, “wanted to take it back to like the origin, you know, the first time we worked the record I had short black hair. I’ve had many stages over the years, so of course, but I’m like we’ll just go back  to kinda how it started.”

Oh and nbd or anything, just kidding, a totally big deal and another undeniably epic moment was when Monica won the "Lady Of Soul" award and her acceptance speech that followed.

In addition the incredible honor, Monica admitted to getting emotional during her speech for a couple of reasons. The first was the surprise video packet she had no idea existed, and the other was remembering her maternal uncle Larry, whom she lost earlier this year. Monica admitted that his death “knocked me off my feet for a minute, and it takes a lot to knock me off my feet. She continued, “that level of love, and not having somebody that means that much, it overtakes you, and so every time I do something I think about how proud of me he would be.”

Like the true superstar she is, Monica powered through and then went on to deliver a powerhouse performance of her greatest hits. She even took a turn at the piano, as she learned to play a small section of “Angel of Mine,” just for the special occasion. As Monica expressed, she’s has always been “the type that wanted to do things right and be as great as possible. So I took on a lot to try and make it different than what I typically do.” Which according to her was more than worth it, “it was so much fun and looking back it, last night was just a feeling of gratitude. “ Monica was overjoyed to “even be acknowledged or thought of,” which she admitted “is not something that happens often for me, so it was a big deal for me last night.”

Monica and Kenny went on to talk about diversity of her career, and how she's gone from gospel, to R&B, to blues, to soul and even a bit of pop. As well as how that fed into every thought out and intentional moment of her performance.

Kenny even came up with his own challenge, “to get all of Monica’s hairstyles,” saying “this needs to be a platform in the Nation Black History Museum.” Urging her fans, “we need to find all of Monica’s hairdos from Miss Thang, 25 years ago.” Monica suggested that the challenge might actually be easy to accomplish thanks to her “dope fan pages.”

“I believe we could find them all there, between them. Like the way they support, and they do not play about me. I love that their energy is like that.”

So with that challenge assumed to be complete, Monica’s words sparked her to come up with a challenge of her own. “I just wanna challenge people to be a little kinder.” Aimed to people all over, “for any artist, athlete, I don’t care who it may be. Your city officials, people that contribute anything good to your life, just acknowledge them, be kind to them, understand they’re human beings too. You don’t know what battles people fighting on the other end.”

Even further than that Monica just wants us to be kinder to one another, and as Kenny put it “show grace on both sides.”

For all that and so much more listen to Kenny’s entire interview with "Lady Of Soul" aka Monica above.