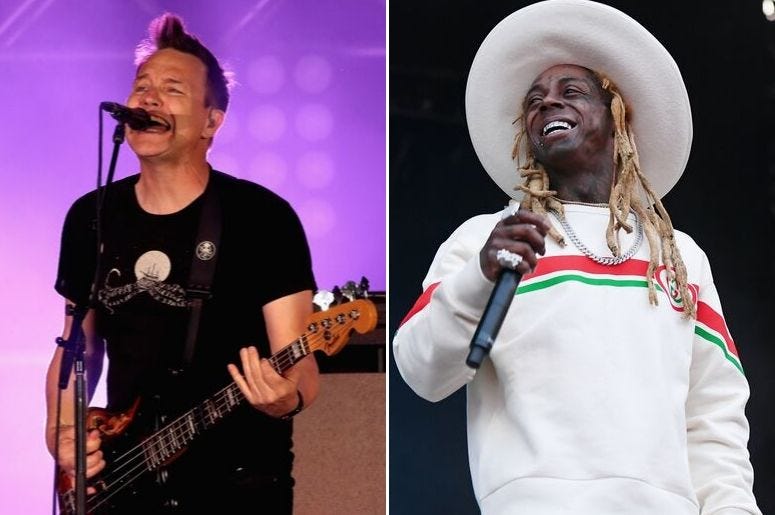 On the last night of the tour featuring blink-182 and Lil Wayne, the pop punk trio surprised the “Uproar” rapper with a birthday surprise.

Sure it was a week early, but after surviving some tumultuous times on this trek, honoring the 20th anniversary of the band’s Enema Of The State album, there was plenty to celebrate.

Before Wayne wrapped up his opening set, Mark, Matt, and Travis walked onto the stage and presented him with a blunt, served to him on a silver platter.

“My f***ing brothers for life man,” Wayne shouted after lighting the gift. “They came on the f***ing stage and gave me a blunt man.”

— lemonade was a popular drink and it still is (@mattwhitlockPM) September 22, 2019

Earlier this month, Hoppus posted a note about some of his feeling on this tour, thanking fans for the “shared experience” they have had together, especially while performing “Adam’s Song.”

"To sing songs and have those songs sung back to us. A shared experience between everyone. It's amazing to see you smiling and laughing," Hoppus wrote. “To have a song bring strangers together to rejoice, to mourn, to remember. It’s awesome and humbling and it means the world to me. You all mean the world to me. Thank you.”

The tour with Lil Wayne ended on Friday, just as blink-182 released their new album, NINE. Starting a new chapter for the band and finding them exploring new sonic landscapes, NINE is now available everywhere.