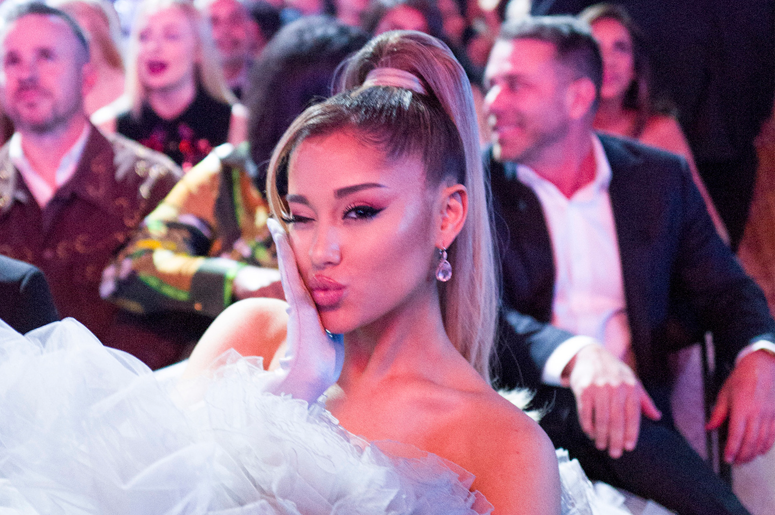 Ariana Grande’s scientifically seductive music video for “34+35” has officially arrived, and according to our calculations, it absolutely slays.

As soon as we pressed play, we were transfixed by the white coat sporting Ari buzzing around her laboratory in her trademark 5 inch platform heels, clipboard in hand, conducting some type of experiment. What is Ari working on you might ask? Oh just a robotic version of herself, a la Frankenstein, omg it’s totally Franken-Ari!

But before Ari could bring her creation to life, she gave it to us. Serenading us with her truly filthy lyrics and serving up some sickening dance moves on a silver platter in a polka-dot-lit room.

Also, can we talk about her looks? In the Director X directed video Ari had about four of them and each one was such a vibe, there’s Lab Coat Ari, White Eyeliner/Nude Bodysuit Ari, Barbarella Ari aka Arbarella, and of course we can’t forget Franken-Ari. With each look we were slain, and then brought back to life by another.

“34+35" marks Ariana’s second single off her sixth studio album Positions. When speaking about the song to Zach Sang, Ari said "I just think it’s ridiculous, so funny and stupid. We heard the strings that sounded so Disney and orchestral, and full and pure. And I was just like, 'Yo, what’s the dirtiest-possible, most opposing lyric that we could write to this?'"

So does the video have anything to do with those naughty lyrics? No. Do we care? No. We’re just here for it, and to watch it… repeatedly. We’ve already watched it “34+35” times, check it out above to catch up.