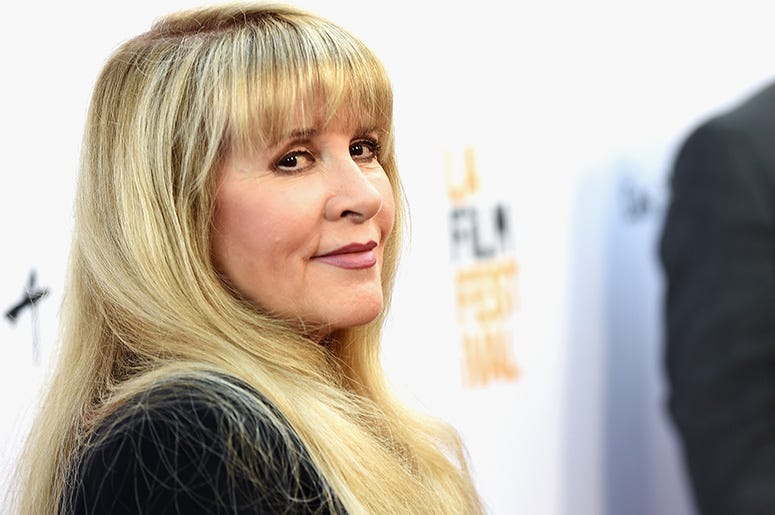 Stevie Nicks is shining new light on Fleetwood Mac’s recording session for the trending track “Dreams,” as a meme inspired by the song continues blazing the charts.

Speaking with Yahoo! Entertainment, Nicks says the group was busy finalizing their iconic 1977 album Rumors when a stranger offered her secret space to create.

"We were up at the Record Plant in San Francisco and were almost done with the 12 demos. Everybody was working on something else in the main studio, and I had this idea. I was kind of wandering around the studio, looking for somewhere where I could curl up with my Fender Rhodes and my lyrics and a little cassette tape recorder," shared Stevie. "And this guy who I didn’t even know said, 'Are you looking for a place to go and play?'"

The mysterious musical Sherpa lead her to a clandestine studio with “a sunken circular shape, actually like a lighthouse, like a circle, and there’s keyboards all around, a bunch of keyboards that went down this tunnel kind of thing.” It wasn’t just ornate style that graced this studio. The man revealed it was originally funk legend Sly Stone’s studio space.

It was all the inspiration Nicks needed to lay down her generational hit. “I just started playing — and I started playing ‘Dreams.’ And within about 20 minutes, it was written and recorded – I mean, super-simply, but nevertheless, I thought, ‘Thank you, Sly Stone and the spirits of Sly Stone and all of your band,’ she said.

“And so I walked out back down the hallway and I walked into Fleetwood Mac’s studio, and I said, ‘Listen up, everybody. I think I have something that you want to hear.’ I played them a little recording of ‘Dreams,’ and we recorded that song that night.”

"As a 72-year-old woman, I feel like this is the last six or seven of what I call the useful years of my life, and I think this virus has stolen time from me. And that makes me angry."

Rumors jumped into the Billboard top 10 this week, thanks in large part to TikTok star Nathan Apodaca’s viral skateboard video. His chilled out, cranberry induced longboard ride behind “Dreams” has notched millions of views and inspired copy cats. Drummer Mick Fleetwood jumped on the bandwagon and shot his own version of the viral sensation.

"@420doggface208 had it right. Dreams and Cranberry just hits different," Fleetwood captioned in his TikTok post "It's only right that you should play the way you feel it," Fleetwood lip-synced with a smile.

As younger audiences discover the group’s classic hits, Stevie have emerged with her first new solo song in six years, “Show Them the Way.” Stevie tells Rolling Stone civil rights icons from 1960’s America, including Martin Luther King Jr., John Lewis and President John F. Kennedy inspired the lyrics. She also used images from a dream. “I watched it all,” she said.

music
‘Law & Order: SVU’ cast, ranked by net worth
news
Seed-planting season: What home gardeners need to know
1thing
1Thing: What does it mean to be eco-friendly?
1thing
3 reasons why you should choose organic tea
music
Maren Morris and Ryan Hurd on ‘Chasing After You,’ and chasing 1-year-old Hayes around the house
sports
Jeremy Lin reveals he has been called 'coronavirus' on the court