Steve Aoki has unveiled the full fourth installment of his Neon Future series, bigger than ever, sporting a giant guestlist that rivals some award shows. Crossing genres and building bridges, Neon Future IV arrives with some surprises, some standouts, and all of the Backstreet Boys.

“I am now a member of the Back-Steve Boys,” smiles Aoki in the exclusive video above. There are even shirts available featuring the EDM pioneer with the “I Want It That Way” group from 15 years ago, showing how far back Steve and BSB go.

“There just like me,” he says of the group, which pops up on the track, “Let It Be Me,” 1 of the astounding 27 that make up Neon Future IV. “Creative spirits. Happy. Happy to create music and do what they love to do.”

“They have so much gratitude in their hearts. They’re just like, very kind-spirited, hard-working people. Which is clear, because they’ve had a career for so many years, and they’re still crushing it. Which is awesome to see. Such an inspiration to see these legacy artists that still crush it, 15, 20 years later.”

After bonding with Nick Carter, Aoki eventually linked up with the whole group, and performed with them in Las Vegas. Now, they come together once again on the latest chapter in Aoki’s story.

Neon Future IV is filled with longtime collaborators like Travis Barker and will.i.am, and new connections and experiments like his take on “Crash Into Me” by Dave Matthews Band, working alongside singer and actor Darren Criss.

Aoki was “blown away” by Criss’ performance in The Assassination of Gianni Versace, needing to meet him. “There was no intention, no expectation,” Aoki says of the two working together, but a hang in Las Vegas over music and matcha led to something more.

“He’s just like playing guitar, singing ‘Crash’ by Dave Matthews, and I’m like, ‘yo, no one’s done that. We gotta do this record!’”

The two got approval for the song, and now the hope is to get everyone together to do it live. “How sick would it be if we did a live thing together with Dave?”

For much more on the making of Neon Future IV, check out the full video above. 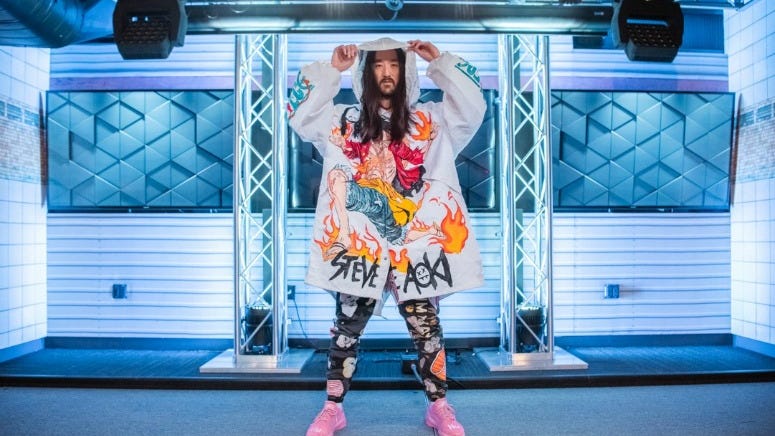