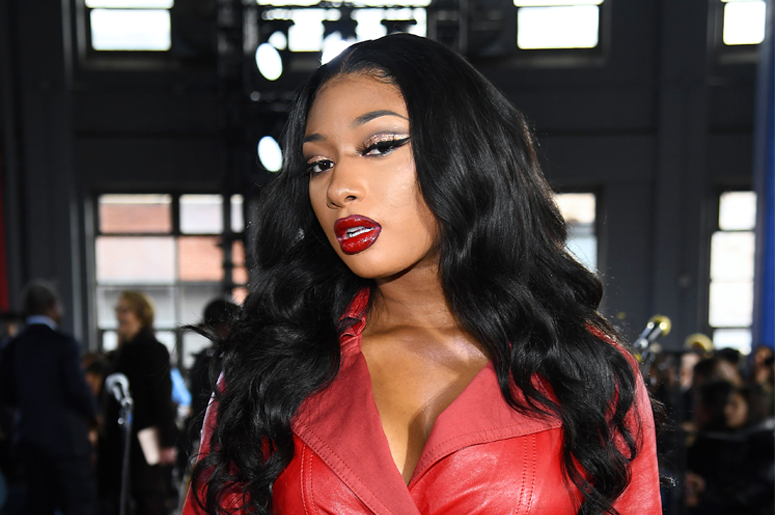 Megan Thee Stallion and James Cordon decided to spice things up this holiday season, by gifting us with “Savage Santa,” a naughty Christmas remix of Meg’s summer hit.

They made a list, checked it twice, and with zero concern of making the nice one themselves, Meg and James show us what goes down in Santa’s Twerk Shop, and straight up, it’s beginning to look a lot like Lit-mas.

Yup, just as all those presents got under your tree, Megan and James delivered, and as she so eloquently promises, it’ll “make your north pole tingle.” She said it, not us.

Posted up in a wintery set, surrounded by scantily clad festive dancers, Megan rapped, "He's sees you when you're sleeping b****, yeah. He's the new mall Santa / Ho, Ho, Ho-ing through Atlanta. Suit from Dolce and Gabanna / Binged 'The Crown' just for Diana” (wait, same).

As Megan continued, “He’s drunk on eggnog / He gets high in Santa's workshop,” Corden Claus gave us some real Bad Santa vibes sipping eggnog right from the carton and using a candy cane as well, not candy (refer to lyrics above).

As the song goes on, the sassier it gets, ”Naughty, got a thicc body / Rosy red cheeks / People think he's Pavarotti / He would never slip on a roof while it's snowing b****/ There's you mom, mistletoe, you know it / Ah, I'm a Santa, Jolly, happy, merry/ Face is plump and hairy / Sacks of gifts I carry," Meg added, with Corden joining in on the chorus.

While ugly sweaters, and a PS5 were present and accounted for (lol get it, present), they made sure to mention that there would be lots of Christmas cheer but absolutely “no Karens.” As the only surprise visits besides Santa coming down the chimney, would be by sitting on his lap.

"I'm a Santa / Call me Krissy Kringle / Make your North Pole tingle," Corden rhymed as Meghan rode a giant wooden horse, tongue out. "Bells are gonna jingle, b****/ They jingle, b****.” Told ya, sassy with a side of sauce.