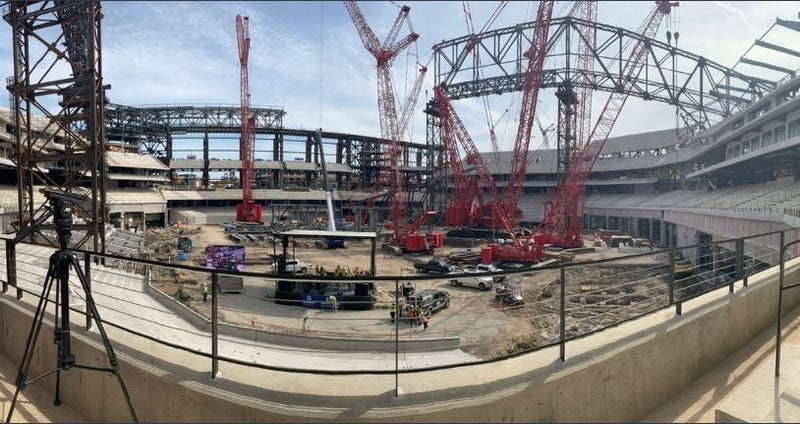 May 6, 2019 05/06/2019 7:52 pm
ARLINGTON (105.3 The Fan) - Construction at Globe Life Field continues to move along on schedule.
The stadium will also showcase a wide range of electronic displays to keep fans informed and entertained.

Continuing its long-standing partnership with the Rangers, Daktronics is designing and installing Globe Life Field’s video system. Dan Fjeldheim with Daktronics says the centerpiece will be the massive display at right field. Hanging off the main truss, it measures 150 feet wide by 58 feet tall. The new ballpark will also have a left field display about 24% larger than the one in Globe Life Park. The out-of-town scoreboard that's integrated into the left field wall at Globe Life Park will move to an 80-foot-by-20-foot vertical display in center field.

When the new ballpark opens, public address announcer Chuck Morgan will have new luxurious digs. His perch will be directly behind home plate at the top of the lower bowl, allowing him to be closer to the fans, as he likes. "I love our fans, and I'll be able to talk to them through the window, and we'll have benches [within the facility> where fans can observe what we do", Morgan said at a press conference Monday.

General contractor Jim Cuddihee says they are making progress not only on the outside but also on the inside. He reports a  majority of the suites are framed, drywall has been installed, and crews are now working on finishes, flooring, and tiling. The stadium's retractable roof will soon begin to take shape - towards the end of this month, crews will start installing the operable roof trusses.

Globe Life Field will open at the outset of the Rangers' 2020 season.