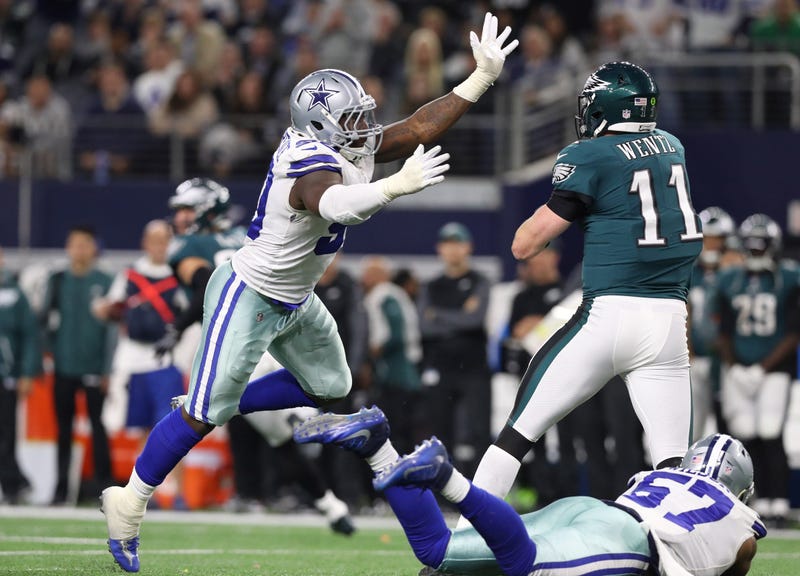 DALLAS (105.3 The Fan) - Dallas Cowboys defensive end DeMarcus Lawrence has been known to be outspoken at times throughout his six-year career, especially when it comes to defending his own franchise.

On Monday, Philadelphia Eagles head coach gave Lawrence and the rest of the Cowboys roster some substantial bulletin board material to digest leading up to their primetime Sunday Night Football matchup this weekend on NBC, when he essentially guaranteed victory over Lawrence and the Cowboys.

“I know the sky is falling outside. It’s falling. And I get that. And the fans are reeling just a little bit," Peterson told host Angelo Cataldi on the SportsRadio 94WIP Morning Show. "But we’re going down to Dallas, and our guys are going to be ready to play. And we’re going to win that football game and when we do we’re in first place in the NFC East. We control our own destiny. We’re right where we need to be. Has it been perfect or beautiful or all of that? No. But all we’ve got to do is try to be 1-0 this week, beat the Dallas Cowboys, and we’re in first place."

After teammates like Zack Martin and head coach Jason Garrett seemingly paid little attention to Peterson's comments throughout the week, Lawrence wasted no time in making a response of his own after practice on Friday, and he didn't hold back.

The Cowboys, who are have been stuck in neutral over the past three weeks after getting off to a 3-0 start, have been no strangers to adversity and difficult stretches in recent years. Just last season, the team overcame a 3-5 start, only to finish the season winning seven of their last eight games, and winning the NFC East in the process.

If one thing is clear about Lawrence this week, it is that he is confident that his team can push through that adversity yet again.

“We have went through this before," Lawrence said. "We’ve seen hell and done dug out of the pits of it. We were 3-5 last year. Y’all asking these same questions. What is there to fear? We are all men. We already know what we got to do. We’re gonna go and show it, and prove it.”

By making these remarks, Lawrence has likely placed a proverbial target of sorts on his back heading into Sunday's rivalry matchup, and with only 2.5 sacks on the year, he will need to make some waves on the field to back up his words. That could be difficult to do, given the opposition's focus on taking him away, as well as his overall snap count being reduced so far this season.

Ever-confident, however, Tank is eager to make a statement.

“You ain’t got to worry about it this week. Doug Pederson already called us out, so y’all know what it is.”