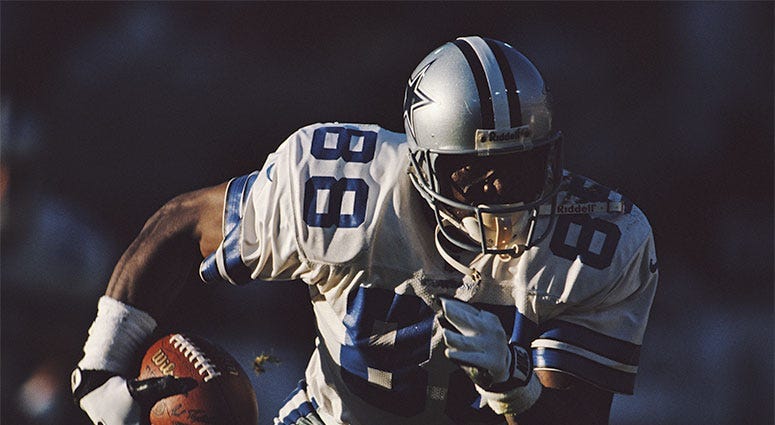 DALLAS (105.3 THE FAN) - Dallas Cowboys legend Michael Irvin is always saddened but proud to tell the story of the passing of his father, Walter Irvin, when the dad was just 51 and the son was just 17.

"He was working up on those roofs six days a week, and he was working in the pulpit on the seventh day,'' Michael will say. "My dad was my Superman.''

And now it might be time for Michael Jerome Irvin to be Superman, too.Irvin announced on Instagram on Tuesday that he may be battling throat cancer -- the same ailment he says took his father. The Pro Football Hall of Fame receiver -- and one of the greatest leaders in the history of sports and one of sport's most charismatic personas, too -- said in the post he underwent testing earlier this week and that he is presently in Los Angeles at UCLA Medical Health undergoing further exams.

“This (demon) has chased and vexed me deep in my spirit all my life,” Irvin said in the post. “So saying 'I am afraid' this time is a big big understatement. I AM TERRIFIED!!”

Walter Irvin was the patriarch of a mixed family that totaled 17 children; shortly after his death, young Michael became the father figure in the family, and for so many players at the University of Miami, so many players with the Dallas Cowboys, and so many other people he's touched in his remarkable life, he's a beacon of light.

That doesn't mean Michael, among the best players on the field in Dallas' trio of Super Bowl wins in the 1990s, is without flaw -- or "without sin,'' as the deeply religious Irvin would himself concede. Indeed, it is his deep faith that has him asking for prayers now.

"My Faith tells me whenever you face great fear you go to your (greatest) power,'' he wrote. "Mine is God. I am asking all who will. Could you please send up a prayer to help my family and I deal with whatever the results may be? Thanks for your thoughts and prayers in advance.''

Irvin is not without ego, but he may end up being astounded by the number of observers who will send well-wishes and prayers. ... and that won't be just because he played 12 seasons with the Cowboys from 1988 to 1999 and owns three Super Bowl rings and multiple team receiving records, including career receptions (750) and career receiving yards.

In addition to the passing his his father, Irvin has a brother who died of stomach cancer in 2006 at the age of 46, all of which adds to what Irvin admits is a high level of fear.

"Growing up in the ghetto of Ft. Lauderdale,'' he wrote, "the one thing you have to conquer to get out is FEAR. I did! As a football player, the no-fear gift served me well as a blessing and an asset on the field but sometimes off the field it’s been a curse and a liability.''

But now, for Michael Irvin, it's about to be a blessing and an asset again. Because he's got "being Superman'' in his blood.