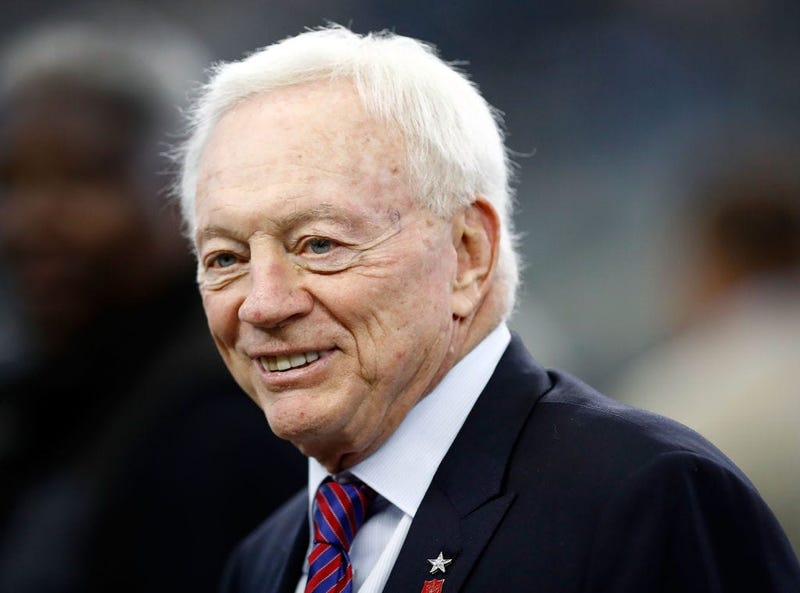 DALLAS (105.3 THE FAN) - The Dallas Cowboys are making progress in their contract negotiations with quarterback Dak Prescott, team owner Jerry Jones tells us in an exclusive interview, adding of the organizational plan, "We're gonna take our future and bet it on Dak.''

The Cowboys are very open about their plans for making the Prescott the highest-paid player in team history, which obviously means more than $65 million guaranteed (the big round number that gives defensive end DeMarcus Lawrence the present status as the franchise's highest-paid player ever), and the idea that the annual number -- with a long-term contract that includes "escape hatches'' -- will be in the range of $30 million annually is hardly a secret, either.

"I do (feel confident about getting a deal done),'' said Jones, who earlier this week told Michael Irvin about feeling "emboldened'' to forge a lucrative deal. "Here's a guy who's had three seasons, and we've watched him under some duress, and we've watched him and seen where he can improve, and watched him improve. And (we have) evaluated whether he's got a chance to get better. They all have to, at this juncture, three years in, be getting better. There has got to be a prospect of them being better. Dak has that.''

Jones, speaking to us while overseeing the Tuesday groundbreaking ceremony for the American Cancer Society Hope Lodge in Dallas, a project to which Jerry and Gene Jones have committed $7.5 million, continues to make it clear that Dallas believes it is mining gold with Prescott. That view came into being quickly after "discovering'' him in the fourth round of the 2016 NFL Draft, and the view has been solidified by watching him help guide the team to two division titles and 32 wins over the last three years. ... those 32 regular-season victories representing a total exceeded by no one, not even Tom Brady in New England.

That's not to compare Dak to Brady as a QB (though the Cowboys have stumbled into that territory before). But Dak as a leader, a winner and a building block? Jerry thinks Prescott compares to almost anybody there.

The insinuation is that Dallas -- knowing what it knows now -- would have made Prescott the No. 1 overall pick in the 2019 NFL Draft.

RELATED: Are Cowboys Good Enough To Sit Out Phase Two Of Free Agency?

"We,'' Jones said with emphasis, "feel that strongly about him.''

While the Joneses obviously have loose purse strings when it comes to charity -- and as much as Cowboys Nation argues about "Jerry the GM'' or about some decision made in the draft or about some comment he makes on the radio, the generosity should not be overlooked -- when it comes to paying players? There is a salary cap to be observed. Jerry acknowledges that. But what is coming for Dallas is Dak Prescott as the highest-paid Cowboy ever ... and Jerry is very comfortable with that "future bet.''

news
Will Bikefest at Lake of the Ozarks Become a Superspreader Like Sturgis Motorcycle Rally?
news
Woman's Tweet Saves Father's Food Truck After Selling Only $6 Worth of Tacos
news
Woman Goes Viral After Video Captures Her Twerking on Casket in the Middle of Funeral
news
Pastor Who Told Congregation Not to Wear Masks Now Hospitalized in ICU With COVID
news
US Downloads of TikTok, WeChat Banned Starting Sunday
music
Billie Eilish Calls Out People Partying During Pandemic: 'I Haven’t Hugged My Best Friends in Six Months'