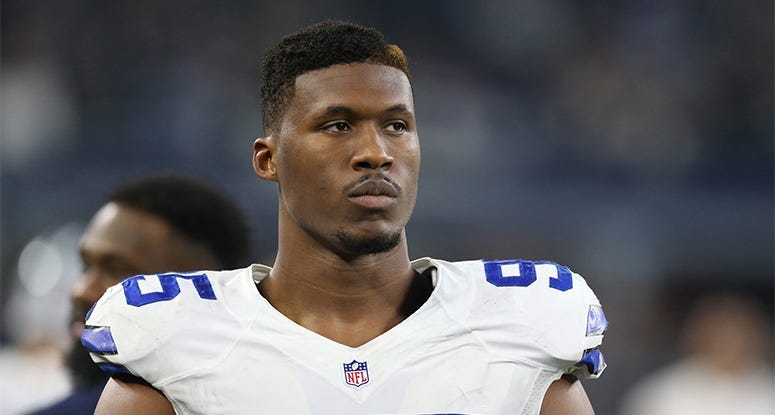 FRISCO (105.3 The Fan) - Most of the time, David Irving's self-delusional con game takes down but one victim: David Irving himself. But this time, in yet another round of the former Dallas Cowboys defensive lineman trying to justify his unorthodox departure from football, he's attempting to pull Jason Garrett down into the muck with him by charging the Cowboys coach with racism.

“It’s not just one person that doesn’t get along with him,'' Irving told CBS Radio's "Tiki & Tierney.'' It’s a lot of people. I feel like he needs to be more comfortable with people of color, to be honest with you. This is a league where there’s a lot of people of color around, and you’re going to have to deal with us. If you don’t know how to talk to us or relate to us – we just never got along. He’s the only person I haven’t gotten along with in pretty much all my career in football.

“I think it’s a little uncomfortable for him. Not to say the man’s racist. He’s definitely not racist. Do not get me wrong. It’s just maybe he’s socially awkward.''Irving's bumbling attempt to first blame Garrett for the death of his career (which I'll detail below) and then even more clumsy effort to put the racially-charged toothpaste back in the tube reads and sounds like maybe a young man who prides himself on outrageousness came to a mid-sentence realization that he'd overstepped even his own virtually unlimited boundaries.

The insinuation that Jason Garrett operates his football team as a practicing racist ... well, no wait, maybe he's just socially awkward ... is a deflection from David's real challenges, an irresponsible allegation made by an irresponsible person, and worst of all, an attempt to brand another man who in the end quit giving Irving chances in a way that can do everlasting damage. And why?

How do you prove a negative?

Is Jason Garrett, who in his 30 years in pro football has established himself to be a "character guy,'' now supposed to parade in front of the court of public opinion a series of defense witnesses who are people of color? Am I, as a journalist with some intimate knowledge of the truth of the Irving/Garrett interactions, supposed to do the parading? I could call upon former teammates Michael Irvin and Emmitt Smith to testify on behalf of Garrett. I could call on social running buddies Miles Austin and DeMarco Murray to do so. I could call on present locker-room leaders Dak Prescott and Jaylon Smith to do so.

But what would there testimony really "prove'' to someone who believes otherwise? How is the doubter to ever be certain what is in the head and heart and soul of another man? For this reason, no one can "prove'' they do not harbor racist thoughts or feelings. Therefore, there is no way to out-wrestle an accuser like David Irving once he has pulled you down into the muck.

Part of Irving's defense of himself on the radio show came in the form of him explaining that he really, truly tried to come back from an ankle injury late in the 2018 season, only to be rebuffed by Garrett.

"I know he has a problem with me because I don’t necessarily work as hard as he thinks I should work to be as good as I am at football,'' Irving said. "I feel like Jason is one of those guys where, growing up in football, he was always the second-hand man or the third-string guy, and I feel like he had to work his a-s-s off to even be able to step on the field with some of these guys. Me, I could roll out of bed with a hangover and go outperform anybody. I don’t think he liked that.”

There is some truth there -- not the part about "resenting'' Irving's talent, but rather, about hating to see it go to waste via "hangovers.'' There is also a nugget of truth in Irving claiming that he would show up to work in the final months of the season, only to be told to go home. The way David tells it, per "The DA Show,'' "He was like, ‘Well, why don’t you just quit? We don’t need you anyways. You can go be an actor. You do acting, right? They don’t drug test there. Just get out of here.’ He told me don’t come back to the facility.''

The truth, as I reported at the time: Irving was failing multiple drug tests during those final months, when an NFL official would show up here at The Star to instruct him to pee in a cup. Finally, Garrett or someone on his staff did indeed give Irving a heads-up to go home -- because it was time for another test that would inevitably be failed.

Additionally, Irving failed to show up for work on his own, plenty. And failed to properly rehab his ankle, too, which is the real reason Garrett finally tired of his act -- even as the organization carried him on the 53-man roster all season long, and kept those much-needed paychecks coming. Even now, David's lack of honesty is reflected in his "retirement'' announcement, in bold defiance of the fact that he'd be ineligible to play even if he wanted to. It's one of those "You can't fire me, I quit!'' stances that always looks so amusingly dishonest.

To me, some of the saddest aspects of the David Irving have nothing to do with his pro-marijuana campaign (it's the right idea but it's being presented by the wrong spokesman) and everything to do with David's unwillingness to take stock in his own life. The "Go be an actor'' concept isn't one Garrett conceived himself; it's the result of the coach knowing where the player's heart is. The "Go home'''/lack-of-support charge is horribly unbalanced, and I know this because of what Irving himself told me a year ago: While he was deeply involved in a custody battle that required him to travel to California and to therefore miss offseason work, he went to Garrett's office, explained the circumstance, and was granted a wide berth by the coach "to do everything necessary for your little girl.''

Those are Garrett's words. Relayed to me by David himself ... And while all it takes is one disgruntled ex-employee with one ax to grind, those words are hardly reflective of a hateful, uncaring boss. Or, most might surmise, a racist one.

It was also a year ago when one of Irving's supporters approached me for some advice on behalf of David. He was having a difficult time, I was told, finding a "mentor, a big brother, a friend'' in his own locker room. I shared my thoughts, which were relayed to Irving, and I then shared those thoughts with a pair of team leaders. Both of them essentially told me the same exact story: That they'd reached out to Irving multiple times, to meet for lunch, to meet for film study, to socialize. "Let's meet at 2 p.m. Tuesday,'' they'd say.

"I stood in front of the room one day,'' one Cowboys teammate told me, "and I called out David and I said, '100 percent, we have your back! We believe in you! We support you!'

"And then after my speech,'' the player continued, "I pulled David aside and I said, 'All I ask in return for us having your back is that you have ours. And in the end ... he didn't. He didn't.''