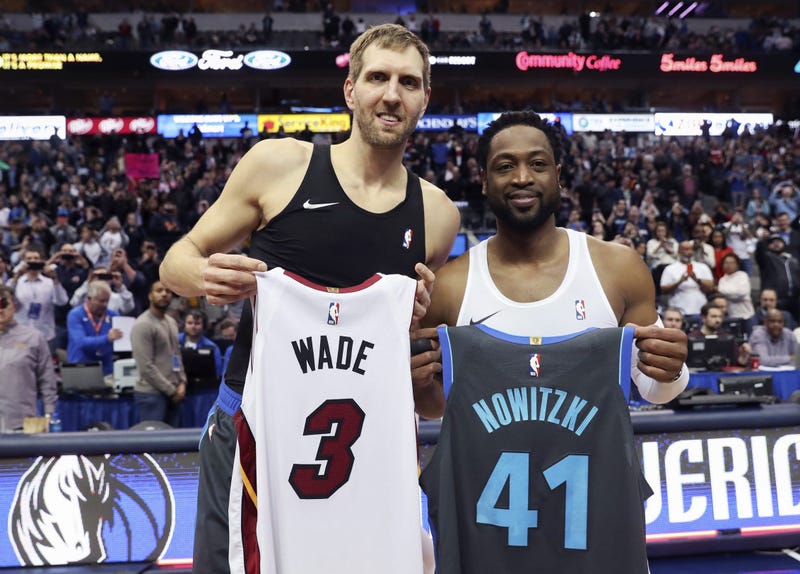 April 4, 2019 04/04/2019 2:58 pm
DALLAS (105.3 The Fan) - In his farewell interview with Sports Illustrated, Dwyane Wade had some interesting comments, some are saying are a final dig at Mavericks' legend Dirk Nowitzki.
In the write-up that appears on SI.com, Wade discussed his decision to return for one final season with the Miami Heat but under one condition.

Wade wasn’t interested coming back to play “15 minutes a game and not [make> an impact. I don’t want to be the guy to sit on the bench and the fans always have to chant, ‘We want Wade.’ ”

Those comments could be taken as a direct shot at Nowitzki, who has no desire to be celebrated whatsoever unlike Wade, but has gotten showered with praise anyways in every building he's entered this season.

It's can't be certain that's what Wade was doing here, but his critical comments of Nowitzki in the past certainly don't give him the benefit of the doubt.

Wade did respond to a fan on Twitter who was critical of the Miami Heat guard's comments.

Haha dude what is your problem. Have we met? @swish41 is GREAT. Just as iam. To love someone you don’t have to try and hate others. Just sit back and appreciate greatness! https://t.co/yFO8eX9yre

Wade and Nowitzki appeared to bury the hatchet multiple times this season, particularly at Wade's final appearance in Dallas when the two exchanged jerseys after the game.

The two were also named as honorary All-Stars by NBA Commissioner Adam Silver for their contributions to the game.