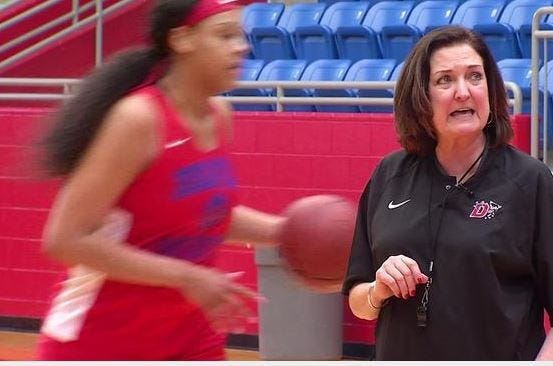 The chair of the University Interscholastic League's executive committee, Mike Motheral, says the UIL received a string of text messages that show Self-Morgan may have been trying to recruit players to the school. Last week, Motheral ordered Duncanville ISD's athletic director to investigate.

Self-Morgan announced her retirement after Duncanville was upset in the first round of the playoffs, losing to South Grand Prairie High School. She  released a statement saying her 19 years in Duncanville were the "highlight of my career," but the statement does not mention the investigation.

"I have loved my Pantherettes and our amazing fans, but after 42 years of coaching, it's time for me to step away. That's why on February 4, I submitted my letter of retirement. I will always cherish the memories I have from this district and with my Pantherettes," Self-Morgan wrote.

Self-Morgan was inducted into the Texas Sports Hall of Fame last year. Over 42 years of coaching, she has won 1,170 games. Self-Morgan won three state championships as coach of Westlake High School, near Austin, before joining Duncanville.

Motheral has given Duncanville ISD a month to complete its investigation.