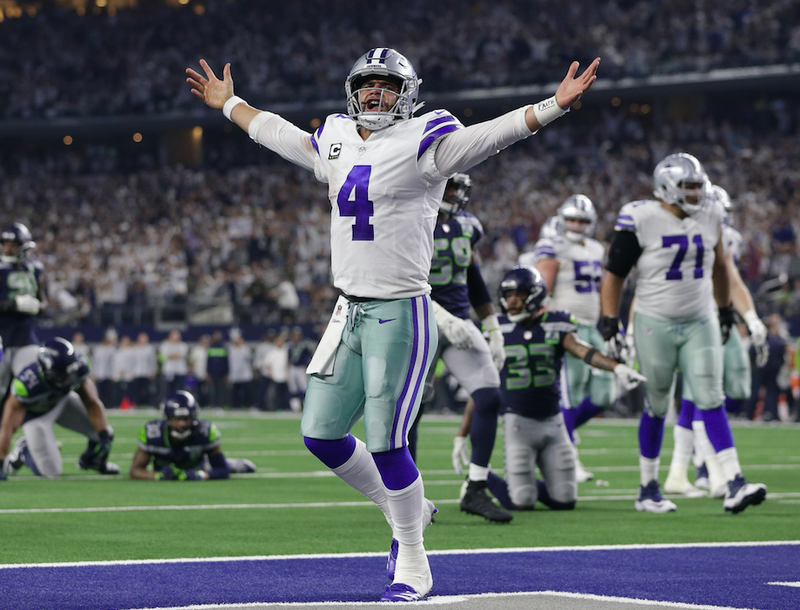 The Fan hosts give their grades of the Dallas Cowboys offense, defense, and special teams in the 24-22 win over the Seahawks.

Cowboys Offense: (B) This is kinda how they do it. It's not always pretty but it works for them, and their 4th quarters are very very good

Cowboys Defense: (B) I'd give them an A on results, but I can't in good faith give someone an A when the other team voluntarily took the ball out of their best players hand.

Special Teams: (B) I thought about giving them a C+ based on the missed kick, but I won't. They never should have been put in that position. Kicking a 58 yd FG in a Non-end of half type situation is criminal. Punt or go for it. Both are better options than kicking a low % kick.

Cowboys Offense: (B) Great 4th quarter gets them to a B, 1st 3 quarters probably an F.

Cowboys Defense: (A-) Great job most of the game. They seem to have major issues late in games.

Cowboys Offense: (C) They did what they tend to do a lot. They ran the ball well, didn't pass it very well, and when they needed to get good QB play late they got it.

Cowboys Defense: (B+) The Seahawks helped them by running the ball so much but the Cowboys defense was up to the task.

Cowboys Offense: (B) I feel like we complain a lot, just to complain. Zeke with a huge day. Dak making a couple plays with his legs. Enough good throws to get by. The blemish for me is the constant lining up in I-form, 3 tight ends on short yardage attempts and the Dak interception.

Cowboys Defense: (A) The Seahawks made it easy on them by going hyper-conservative, but that defense was swarming.

Special Teams: (B) I'm not mad at Maher like the rest of the world. Tough spot to be in. You'd like for him to make it obviously, but tough luck, get em' next time. Finally a little bit of promise out of the punt return game.

Cowboys Offense: (B) They had a 100-yard receiver and a 100 yard running back. They had bold moves for strikes and that one turnover wasn't a panic turnover it felt a lot like a busted moment. They scored 24 points and that was the most scored on the weekend. Be better next weekend.

Cowboys Defense: (B+) That was the exact type of game Seattle wanted to play. I said all week it would come down to the wire maybe even overtime because SEA is a close to the vest team like Dallas. The Cowboys made some great plays behind the line of scrimmage and didn't get blasted for the deep ball on a TD. Really good effort. ... would like to see some turnovers forced though.

Special Teams: (C) Stop me if you've heard this before...if Tavon Austin stays Healthy, Brett Mauer misses. Seriously, if Austin stays healthy they might have an element to the kick return game we've never seen, and the offense and defense won't have to shoulder so much of the load.

Cowboys Offense: (B-) Sure the offense scored more than any other team on Wild Card weekend, but don't we all feel this game should've been more lopsided and over sooner?

Cowboys Defense: (B-) This defense rules ... for 3 quarters; but considering how often the Cowboys' games come down to the last minute, their 4th quarter showings are troubling.

Special Teams: (D+) Don't let the one Tavon Austin run back that counted fool you; they still had a devastating penalty that lost 7 points, a missed FG and terrible coverage - remain subpar!!