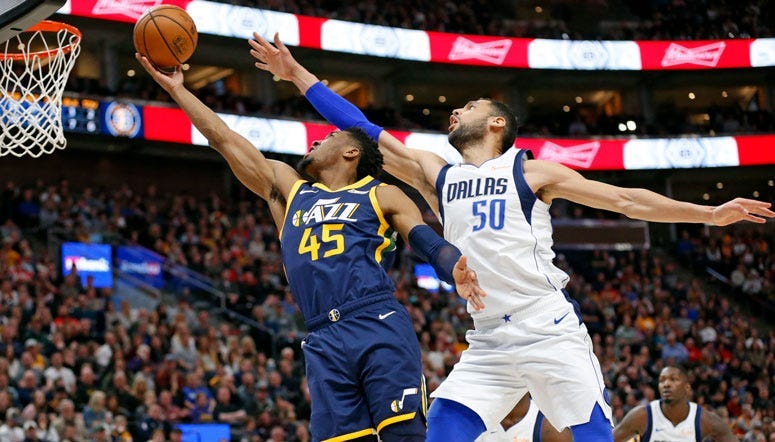 SALT LAKE CITY (AP) — In their first home game after the NBA All-Star break, the Utah Jazz had plenty of energy down the stretch.

Utah pulled away for a 125-109 victory over the Dallas Mavericks on Saturday night by taking care of the ball and picking up the pace on offense. The Jazz shot the ball efficiently and turned it over just seven times.

It was a significant contrast from Friday's 148-147 double-overtime loss to Oklahoma City, when Utah committed 25 turnovers. The Thunder ultimately scored 30 points off those miscues.

"We played a good offensive game," Jazz guard Ricky Rubio said. "Not as good defensive game. But our offense helped us stay in the game, take the lead, and control the tempo every time."

Rubio and Donovan Mitchell each scored 25 points to lead the Jazz. They also combined for 11 assists for the second straight game. Rubio totaled zero turnovers one night after finishing with eight.

Jae Crowder contributed 22 points off the bench and Joe Ingles added 18 for the Jazz. Rudy Gobert had 15 points and 11 rebounds.

Utah didn't trail after the first quarter and took control on both ends of the court. The Jazz shot 48 percent from the field and finished with a 53-42 advantage on the glass. They played under control and consistently executed well.

"The enemy for us is mistakes," coach Quin Snyder said. "Turnovers is one example of that. The more mistakes we make, the more things we've got to do really well. Against the very best teams, you can't overcome mistakes."

Tim Hardaway Jr. scored 21 points for the Mavericks, who were without rookie Luka Doncic for a second straight game because of a sore right ankle. Trey Burke added 20 points off the bench in Dallas' fourth consecutive loss.

"Both teams were on a shortage of gas tonight," Mavericks coach Rick Carlisle said. "But ours was a little shorter than theirs, I guess."

Both teams shot nearly 60 percent in the second quarter, when Utah opened a double-digit lead. The Jazz carved out their largest lead of the first half when Mitchell nailed a 3-pointer to put Utah up 49-38 midway through the period.

Dallas hung around and whittled the deficit to 59-58 on a 3-pointer from Hardaway with 29 seconds remaining in the half. Mitchell answered with a jumper at the other end to keep Utah's lead from getting completely erased.

The Mavericks couldn't get any closer after enduring a miserable start to the third quarter. Dallas missed 13 of 15 shots and scored just five points over the first 7 1/2 minutes of the quarter.

"The biggest thing for us was making sure that they get one possession," Mitchell said. "They were getting a lot of stuff in the paint, making the extra play. We just really locked in on them and got out in transition."

It opened the door for Utah to pull away. The Jazz ran off four straight baskets, culminating in a layup from Royce O'Neale, for a 78-63 lead with 4:40 left in the quarter.

Dallas made another rally early in the fourth and cut the deficit to 86-83 on a 3 from Dirk Nowitzki. Utah got baskets on five straight possessions to maintain its lead. Ingles fueled the run with a pair of 3s, and Gobert capped it off with a finger-roll layup that put Utah up 98-86 with eight minutes remaining.

"Tonight was one of those games where we just kind of let it go at the end," Burke said.

Nowitzki made his first start of the season for the Mavericks. He responded with a season-high 15 points in 25 minutes. Nowitzki also made a season-best six field goals. The veteran forward has played in just 28 games this season after sustaining a tendon injury in September. He came in averaging 4.7 points and 1.9 rebounds in 11.3 minutes per game.

"That's what I've been doing for two decades," Nowitzki said. "It wasn't that new. It's a little easier to get into the game when you start. You have a rhythm right away. It's a lot easier than coming off the bench."

Ingles appeared in his 281st straight regular-season game. Now in his fifth season with the Jazz, Ingles has missed just four games. He has played in 383 out of a possible 387 games for Utah during that stretch.